Representatives of some 40 organizations in Metro Vancouver say they are considering taking legal action against the federal government after it scrapped the Immigrant Investor Program. 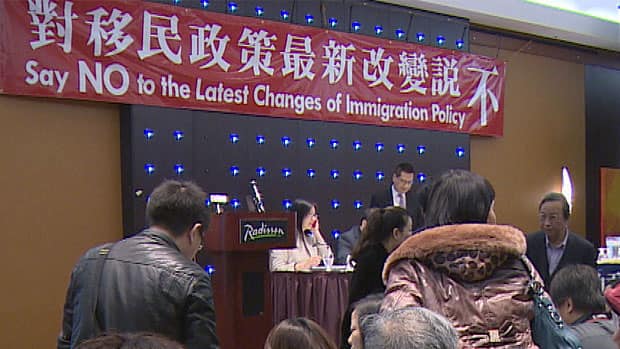 7 years agoVideo
2:09
Federal government may end up in court over program cancellation 2:09

Representatives of some 40 organizations in Metro Vancouver say they are considering taking legal action against the federal government after it scrapped the Immigrant Investor Program.

The Immigrant Investor Program, launched in 1986, offered visas to business people whose net worth totaled at least $1.6 million and who were willing to lend the Canadian government $800,000 interest-free over the course of five years. Last month, the government announced it was ending the program, and scrapping up to 65,000 "millionaire visa" applications backlogged worldwide.

Now representatives of Lower Mainland organizations are angry, and are considering taking legal against the federal government.

"There's a doctrine of legitimate expectation. People put in the application expecting that something's going to happen, but all of a sudden all they knew everything's cancelled, funds refunded," said immigration lawyer Chris Ho.

Immigration consultant Sophia Huang has helped people navigate the immigration process for 22 years, and says she deals with some 2,000 people annually. She says the cancellation of the Immigrant Investor Program is bad news for her business.

"Absolutely. Everybody is suffering," she said.

"On investor program we charge about 10,000 Canadian dollars. This is standard fee," she said.

Realtor Samuel Cheung says Vancouver has been a popular destination for people immigrating to Canada under the Immigrant Investor Program, particularly from China.

"They bought houses from here because they're ready for immigration, because they apply for more than three years. They almost here. Almost the last step is coming to Canada."

Without the millionaire visa program, some say that last step has been made a little bit harder.

However, at least one immigration policy analyst says wealthy foreigners still have other ways to immigrate to Canada.

"It's like a house with 45 windows. You close one window, there's 44 left," said Richard Kurland.

"They can come under provincial immigration programs, business economic programs, the new start up visa program. There's no end to this stuff."

With files from the CBC's Belle Puri