The Vancouver School Board got a mixed reception to plans to change its sexual orientation and gender identity policy at a packed public meeting Wednesday night. 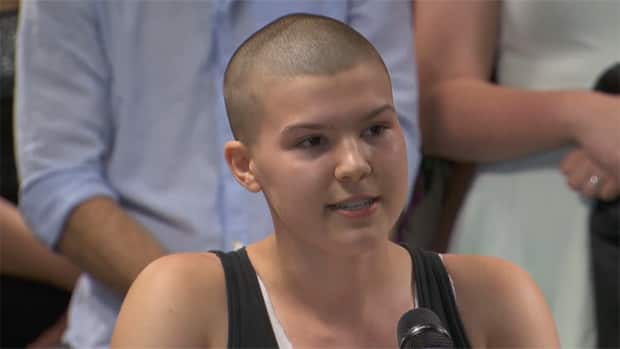 7 years agoVideo
1:46
Proposed changes would allow trans students to use any washroom 1:46

The Vancouver School Board got a mixed reception to plans to change its sexual orientation and gender identity policy at a packed public meeting Wednesday night.

Dozens of students and parents filled the board's meeting room, as they heard from 35 speakers on the new policy, which would discourage sex-segregated activities and allow transgender students to use whatever washroom they wanted.

Opponents argue the board is trying to ram the changes through without speaking to enough parents, but advocates say the policy will better protect and support transgender students and staff.

Roan Reimer, a 17-year-old student at Vancouver Technical Secondary School and a queer and gender varying individual, was the first person to speak at the meeting.

"I can tell you about being taunted, and yelled at and spat on when we try to use the washroom that doesn't correspond to our gender identity," said Reimer.

Reimer described how that level of hatred made studying difficult, and how getting around the current school rules became a regular pastime.

"I spent months using only the washroom in the basement of my school where no one ever goes. I would sneak into it, making sure that no one would see me, just so I wouldn't get yelled at for using the 'wrong' washroom."

The board has had a policy since 2004 to support a positive learning environment for students and staff who identify as lesbian, gay, bisexual, transgender and gender queer or questioning (commonly shortened to LGBTQ+).

The proposed changes extend this policy so students are addressed by the name and pronoun that corresponds to their gender identity and a gender-neutral washroom is provided at all Vancouver schools and worksites.

Some parents think the School Board may be going too far and think parents should have a greater say.

Cheryl Chang, chair of the Parent Advisory Council for Lord Byng Secondary School, believes students' gender identity is a medical issue that should not be addressed at school.

"It is inappropriate for teachers to be writing up a policy without having approval by the B.C. College of Physicians and College of Psychologists," said Chang.

Chang is frustrated with the public hearings and wants better consultation from the board.

A second night of public input will be held on May 22. A decision is not expected until June.