B.C. school board officials say they don't have the money to restore class sizes to pre-2002 levels. 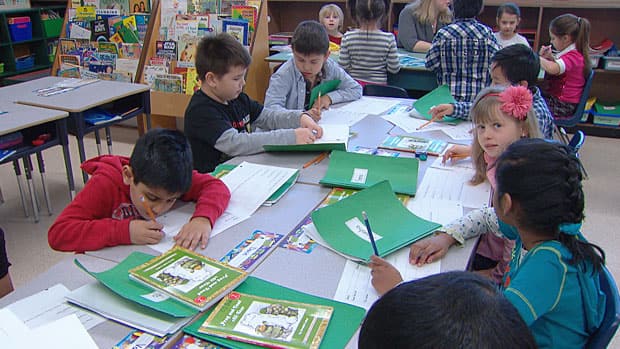 B.C. school board officials say they don't have the money to restore class sizes to pre-2002 levels. That's how long the B.C. Teachers Federation and the government have been fighting over the issue.

The provincial government stripped the language around class size, composition and special needs students from the teachers' collective agreement in 2001 and introduced legislation restricting their right to negotiate those issues.

But the B.C. Supreme Court ruled the move unconstitutional in 2011 and gave the government 12 months to fix it. This week it fined the government $2 million for failing to abide by its order.

Premier Christy Clark says the government is reviewing the decision, and an appeal is likely.

Turning back the clock to a time when each school district had its own local language around staffing and class sizes won't be easy.

"It's very different from how we organize classes now. It would be a very complicated task. Certainly if we were required to do it retroactively, I'm not sure how that would be approached."

School board officials say they don't have the funding to put the old system back in place. Bacchus says something will have to change.

"I'm not sure we could do it with the current budgets that we have allocated to us from the province. We've cut about $47 million in our spending since this happened."

B.C. teachers and the government are currently negotiating a new contract and want to bargain with the restored language in place.

"Put the money into our schools rather than putting it in other areas, such as the roof on BC Place, the Convention Centre. They spent a billion dollars on security for the two weeks of the Olympics. Those were choices they made all in the same climate where they said they have no money."

Government officials are still reviewing the court's decision. Clark, who was education minister when the government first imposed restrictive legislation on teachers, says the decision is being reviewed and could be appealed.

School board and government officials agree turning back the clock will be expensive and right now no one knows how it will be funded.

with files from the CBC's Belle Puri