Final guests leave B.C. ski resort after being trapped for days from mudslide

A ski resort in B.C.'s Fraser Valley cleared the last of its guests Monday after hundreds of people were stranded for three days due to a mudslide that blocked the only access route in and out of the area.

A ski resort in B.C.'s Fraser Valley cleared the last of its guests Monday after hundreds of people were stranded for three days due to a mudslide that blocked the only route in and out of the area.

More than 100 millimetres of torrential rain and muck took out a kilometre of Hemlock Valley Road below Sasquatch Mountain Resort area on Friday, trapping about 500 residents and visitors at the modest ski hill about 130 kilometres east of Vancouver.

About half of them paid for a helicopter ride off the mountain within two days. The rest hunkered down at rental condos and cabins, some without power, waiting for an update from provincial officials working around the clock.

On Monday, B.C.'s Ministry of Transportation said it briefly opened the road to one-way traffic and escorted about 100 vehicles down between noon and 2:30 p.m. PT behind a pilot vehicle.

The ministry said there would be another window to leave the mountain around 5:30 p.m. The road will close overnight so crews can continue repairs.

The resort has 200 staff and roughly 100 live on the mountain. About 50 have stayed, she said, and some were able to drive down in the Monday convoy to get groceries.

Lim said the resort is starting to run out of food and its supply truck can't get up. A chopper flew in some supplies over the weekend like medications and fuel.

There are also 20 vehicles left behind by people who left by helicopter. She said government convoys will allow cars to access the road at certain points Tuesday.

WATCH | Aerial footage from DriveBC, a provincial service, shows the extent of the damage: 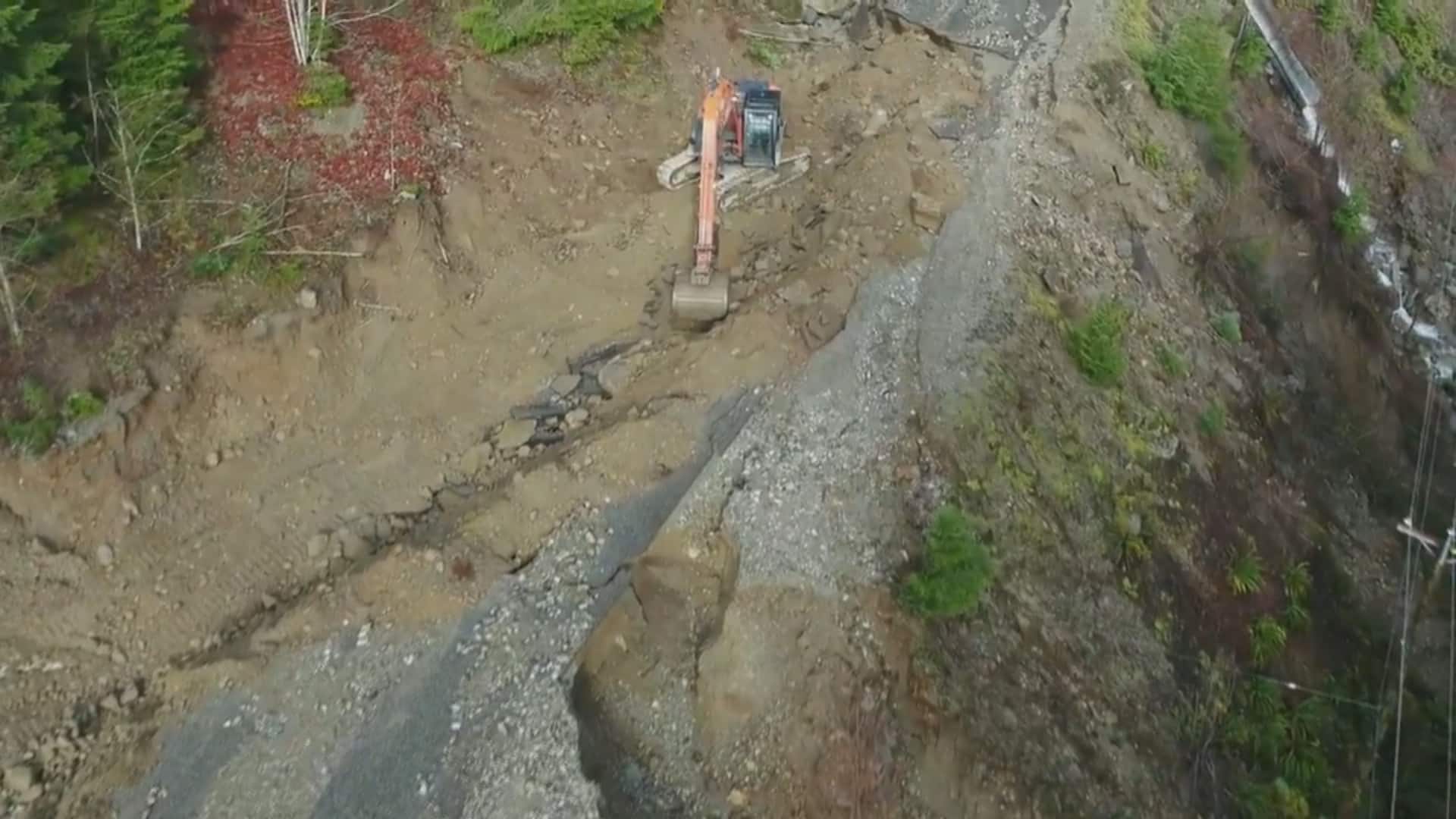 10 months agoVideo
0:34
Hundreds of people were trapped at the Sasquatch Mountain Resort ski area in B.C.'s Fraser Valley after a kilometre of road was washed out by a landslide on Jan. 31, 2020. 0:34

The ministry said its teams worked non-stop to build a temporary, stable, one-lane road with limited access so people on the ski hill could leave.

"We've got to be very careful about how we make those emergency repairs to make sure it's a safe passage for travellers," said Ed Miska, the ministry's executive director of engineering.

Miska said the province's older road infrastructure is not designed to handle the extreme weather events that have become more frequent in recent years.

"Water is a powerful force of nature and although we plan for a certain amount of it, there are, at times, weather conditions — such as what we've experienced over the last couple of days — that can impact roads and related infrastructure," he said in an interview with CBC's The Early Edition.

"Newer roads that are designed will have the drainage systems to accommodate the changing climate. That being said, we have a tremendous legacy of infrastructure that was designed before climate change and it will take time for upgrades to happen."

Most people stuck at the resort had travelled there earlier in the day with plans to stay the weekend, as a children's ski race was being held on the hill. Some, though, drove over the doomed road with an hour or so to spare.

"Water was just coming down all over the place. I kept wondering how the roads were still here. I kept wondering, 'This is not going to end well,'" said Michael Iwasaki, one of the resort guests, describing his drive up the mountain Friday.

More than 250 guests, including Iwasaki, paid a private helicopter company $150 each for a lift home on Sunday. Some of their children, largely unfazed by the disaster, gleefully took a co-pilot's seat and bounded onto the tarmac after landing at the Chilliwack Municipal Airport.

"I think next time there is a large storm warning, we're going to stay home," said Diana Chaytor, another guest who took a chopper down with her family.

"But it was a fun helicopter ride, first time for all of us."

Lim, the resort employee, said the hill was coincidentally well-prepared to host hundreds of people for the weekend because of the scheduled ski competition.

Losing power in the storm was unexpected, but Lim said guests came together in the generator-fed lodge to charge phones, warm up and cook meals. Some who lucked out with wood-burning stoves in their units deliberately delayed a helicopter ride home to watch the Super Bowl on Sunday.

She acknowledged the steep cost of a flight home, but said it couldn't be avoided to cover the labour and gas for the private company.

Lim said she's hoping the resort can reopen over the weekend, depending on how quickly road crews get the work done. The resort's finances have taken a major hit from the closure, she said.

"The most important thing is that nobody was hurt. Everybody got off the mountain safely," she said.

Elsewhere on the South Coast, local states of emergency were declared in the Cowichan Valley on Vancouver Island and the District of Kent in the Fraser Valley. Both areas were overwhelmed by rain, which flooded or washed out major roads. Dozens of people had to evacuate their homes in the Harrison Hot Springs community.

The border crossing between Abbotsford, B.C., and Sumas, Wash., was also shut down after water swamped the U.S. town, leaving no route for drivers heading north or south.

The storm was a fitting end to one of the wettest Januarys on record for the southwestern corner of the province, with at least 28 out of 31 days marked by some form of precipitation.