Vancouver actress Sarah Edmondson is warning people about what she calls a "secretive" organization that she once embraced and now fears.

'We were weeping. It was like something out of a horror movie,' says Sarah Edmondson

Vancouver actress Sarah Edmondson is warning people about what she describes as a "secretive" organization that she once embraced and now fears.

Edmondson, 40, said she regrets if she inadvertently helped deliver Vancouver recruits to the group, which she said eventually led her to travel to Albany, New York, last spring, where she underwent a harrowing flesh branding on her abdomen.

The event prompted her to cut ties with Executive Success Programs (ESP), a self-help organization she first joined in 2005, drawn by its positive messages of female empowerment.

At one point, Edmondson spearheaded a Vancouver chapter for the group, opening an office on Georgia Street in 2009.

But her role in the group took a dark turn last January when an ESP mentor and friend flew to Vancouver and urged her to join a secret splinter group.

The two arranged to fly to Albany in March for an initiation.

There, Edmondson joined four other women at a private condo where they took turns holding each other still while a brand was burned into their lower abdomens.

"We were looking at each other, at the beginning, and we had surgical masks on because the smell of burnt flesh was so strong," she said. 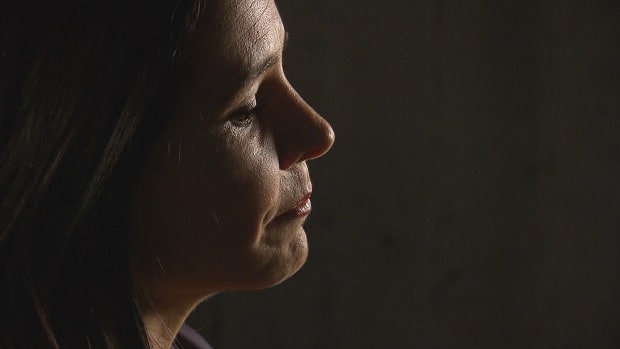 3 years agoVideo
4:43
Sarah Edmonson, 40, says she was convinced to join a secret group of woman, but had no idea that the initiation would include a painful 'branding' ceremony 4:43

She said the branding marked a turning point in her relationship with ESP, despite the fact the company says it is not connected with the "social" group involved in the alleged branding.

Back in March, Edmondson said she believed that the ritual would help her become more empowered.

But now she believes her consent was fuelled by what she calls anti-female indoctrination.

"It's not OK to carve another person's initials into someone's flesh," she said.

The branding ritual was never mentioned when her friend, a long-time ESP leader first invited her to join the secret group of women in January 2017.

After leaving the group in June, Edmondson says she was shunned and faced police questions.

She believes another highly-placed ESP leader told police she committed fraud and theft.

Vancouver police confirm its financial crime unit is investigating, but can't confirm who is under investigation.

NXIVM was founded in 1998 by Keith Raniere, an enigmatic leader from Clifton Park, New York, who calls himself "Vanguard" and is linked to actresses and heiresses but does few interviews.

NXIVM says it is not involved in alleged 'branding'

NXIVM leaders did not respond to CBC's requests for an interview.

But following similar allegations reported in other media, an official statement from the company said it had nothing to do with the "social" group allegedly engaged in human branding.

The statement adds that the company condemns violence and has provided educational tools to 16,000 people in 30 countries aimed at human empowerment.

Edmondson said she decided to share her experiences to warn other active members, despite promising to keep them secret.

In the past few years, she said more women were assigning themselves voluntary penance, in the form of low-calorie diets or handing over collateral, such as cash paid to the organization, if they failed to hit recruitment goals.

She said the group has changed since she first joined in 2005, when she was searching for personal fulfillment and the classes helped her overcome fears and barriers in her acting.

But there were inklings that something was wrong.

Edmondson read news stories that made it sound "cultish," but says coaches persuaded her that the negative stories were not true.

Edmondson earned a green-hued sash after reaching a level of teacher or "proctor."

She says she recruited hundreds of people who paid $300 to $10,000 for workshops and seminars, held all over the Lower Mainland, in New York and Washington States.

In late summer every year the group holds a retreat near Albany to honour Raniere.

The events that led Edmondson to the branding ceremony began last January, when she says a long-time ESP friend — and mentor — came to visit and stayed at her home.

The friend invited Edmondson to join a "bad-assed" secret sisterhood.

She told Edmondson if she wanted to be part of something called "DOS," there were extra hurdles.

DOS was described to her as a secret group of women who would work to change the world.

She said she was asked to provide collateral to ensure the group remained secret.

That collateral included submitting self-incriminating material such as a nude photos and written confessions of past misdeeds, even handing over a condo deed.

She handed over a nude photo of herself and written confessions.

She said she learned she would receive a "dime-sized tattoo." And she would be compelled to refer to her sponsor as "master," and eventually wear a necklace to symbolize a slave collar.

Edmondson said she was reluctant, but her friend eventually persuaded her.

By the time she headed to New York, Edmondson said she had already experienced years of ESP "indoctrination," which introduced ideas about women being emotional, weak, lacking character, and at the same time reinforcing obedience.

She said that DOS, which she was told stood for dominant over submissive, translated from Latin, was a safe place where women could become stronger by learning to "humiliate" each other.

"If a man does it he's seen as an abuser," said Edmondson, who said she now cringes at her former beliefs.

In Albany she said five women from Canada, the U.S. and Mexico were blindfolded and taken to a condo.

There they kneeled, naked, and recited a script that began: "Master please brand me. It would be an honour."

Then they took turns holding each other down on massage table while a female doctor burned lines into their lower abdomens with a small cauterizing iron, as they writhed and screamed in agony.

Medical face masks helped with the stench of burning flesh, she said.

Three weeks later, she said she discovered that the third-degree burns etched on her lower abdomen were not a symbol of the four elements, as she believed.

She said her mentor told her that the crude marks are letters forming the initials KR for Keith Raniere.

"Branding means you are owned by another person," she said.

By June 2017, she closed her chapter of ESP in Vancouver.

In July, she filed a complaint with the New York State Department of Health against the doctor involved in the branding. Officials there told her to go to police because the issues did not represent "medical misconduct."

Edmondson said she then went to Albany police but her complaint went nowhere because she had consented to the entire exercise.

Police did not respond to queries, but a spokesperson for New York Governor Andrew Cuomo told CBC that his office is looking into the "disturbing allegations."

Edmondson insists she broke no laws, and just wants to warn others who may get lured in.

"I hope they wake up," said Edmondson.

But she says in an odd way the work she did in the personal development program did make her stronger.

"Crazily enough, they taught us to stand up for our principles. I had to leave ESP to figure out what those principles are," she said.