It was planes, boats and automobiles — and a little bit of protest and politics — for the Duke and Duchess of Cambridge as they spent the day touring Haida Gwaii, B.C.

Itinerary includes canoeing, culture and fishing with some local teens 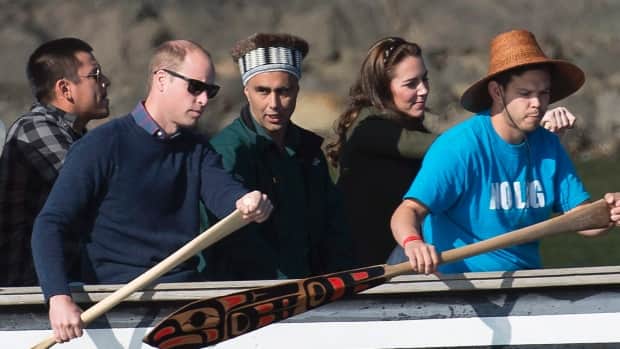 The royals have arrived at Haida Gwaii

4 years ago
0:34
Prince William and Kate paddled in a replica war canoe and were welcomed by Haida elders, chiefs and children. 0:34

It was planes, boats and automobiles — and a little bit of protest and politics — for the Duke and Duchess of Cambridge as they spent the day touring Haida Gwaii, B.C.

The visit to the remote island home of the Haida Nation was one of several stops in their eight-day trip to include a strong Indigenous cultural focus.

It was also the first day the royal couple travelled in B.C. without Premier Christy Clark, after Haida leaders said they asked her to stay home because of her support for an LNG mega-project proposed for nearby Prince Rupert.

After their plane landed in Haida Gwaii, William and Kate boarded a traditional canoe with 12 Haida warriors for a paddle from Skidegate to the Haida Heritage Centre and Museum.

"We had extra-precious cargo. It's a little extra care and attention," said paddler Jason Alsop, whose Haida name is Gaagwiis.

But Alsop and the other paddlers also took advantage of the media attention and audience with the royals to send a political message.

The paddlers wore T-shirts that said "No LNG" to show their opposition to liquid natural gas development in the province.

"We wanted to take the opportunity to show our perspective on development on the coast here with frack gas and our opposition to it. It was a chance to do a respectful, silent protest," Alsop said.

Prince William and Kate disembarked from the canoe on the beach in front of the Haida Heritage Centre, where they were greeted by 13 Haida chiefs and hundreds of people who lined the rocky ridge along the water.

Then they were off to visit the new Haida Gwaii General Hospital in Queen Charlotte, where they were to meet residents in the common room and join a discussion with mothers and staff in the maternity wing about maternal health.

Prince William and B.C. Health Minister Terry Lake also were to unveil a plaque to mark the official opening of the hospital.

Later, the royal couple boarded a boat with youths from the Skidegate Youth Centre for a fishing trip, before heading back to Victoria later in the day.

On Saturday, their final day in Canada, the couple have two private visits with charities in the morning, at the Cridge Centre for the Family and at a downtown café with members of the Kelty Mental Health Resource Centre.

At 11:45 a.m. they are to board the tall ship Pacific Grace at Ogden Point and sail into Victoria's Inner Harbour with members of the Sail and Life Training Society and Jack.org.

Then at 3:40 p.m. they'll wave goodbye at their official public departure from Victoria Harbour Seaplane Terminal, followed by a private tour of the south end of the island.

There is no official public appearance planned by the youngsters Prince George and Princess Charlotte, but the boat ride and the farewell might be the public's only chance to see them in person this trip.

With files from Megan Thomas and Richard Zussman