Ross Rebagliati, the snowboarder who was temporarily stripped of his Olympic medal after marijuana was found in his sytem, is hoping to use his celebrity to sell pot. 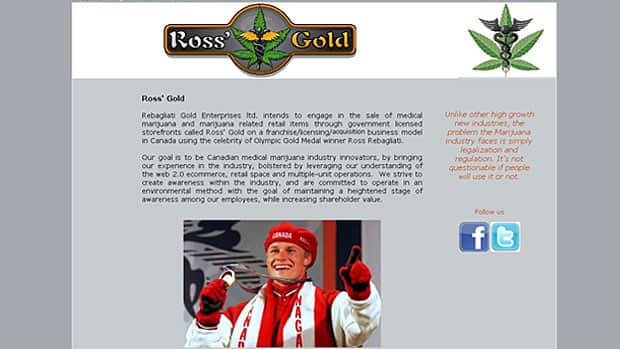 Ross Rebagliati getting into pot biz

A Canadian Olympic gold medalist is hoping to use his celebrity to sell pot.

Ross Rebagliati won the first Olympic gold medal in snowboarding at the 1998 Winter Olympic Games in Nagano, Japan, but lost the medal when marijuana was detected in his system. The finding was eventually overturned and his medal was returned.

Now, Rebagliati plans to open a medical marijuana business with a flagship store in Whistler.

He says Ross’ Gold aims to capitalize on changes to Canada’s medical marijuana business being rolled out by the federal government in March.

"We’re fashioning our entire operation to be within those laws, obviously. This is going to be totally legit, 100 per cent on the right side of the fence as far as the law is concerned," Rebagliati told CBC News.

"Now is the best time to create this business model and not jump on the bandwagon once prohibition is lifted. We want to be an example, we want to set the standard for the industry to follow."

Changing the face of the industry

Rebagliati envisions the operation will include a coffee shop, doctor’s office and storefront with a dispensary in the back where minors won’t be permitted.

He said the first store will open in Whistler this spring but hopes to eventually open outlets across the country.

"Our main goal is to change the face of the marijuana dispensary from the current model of being sort of like a hole in the wall down the street somewhere," he said.

"We kind of want to follow in the lines of the wine industry where it’s high end, five star, very stylish, very up to date … we’re looking at creating an environment similar to the one that Starbucks has created for their clients … and try to shed some of the old stereotypes when it comes to the marijuana industry."

Rebagliati said the concept has been a long time coming.

"Fifteen years ago, I was labelled with the marijuana stigma and over the last 15 years it’s followed me. I haven’t done anything to perpetuate it," he said.

"At the time, the environment wasn’t conducive to this kind of an operation and I think over the years it’s becoming more and more accepted. This is basically something that’s been coming down the pipeline for a long time."