The terminally ill B.C. woman who was granted the right to a physician-assisted suicide by a B.C. judge last Friday says she was overwhelmed by the "momentous" decision, but she has no immediate plans to end her life. 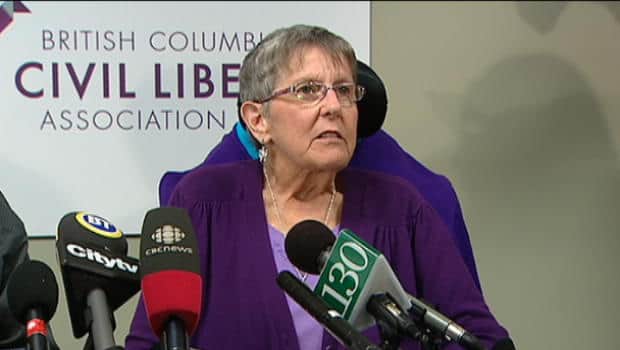 9 years agoVideo
2:09
Gloria Taylor, who won the right to a doctor-assisted death, says she has no immediate plans to end her life 2:09

The terminally ill B.C. woman who was granted the right to a physician-assisted suicide by a B.C. judge last Friday says she was overwhelmed by the "momentous" decision, but she has no immediate plans to end her life.

West Kelowna resident Gloria Taylor spoke publicly for the first time since the decision at a news conference in Vancouver on Monday morning.

"This is momentous time in history. Now all Canadians will have the right to die with dignity. This is a blessing for me and for all other seriously ill Canadians," Taylor said.

"I'm so grateful to know that if I choose to do so I will be allowed to seek a doctor's help to a peaceful and dignified death. This brings me great solace and comfort," she said.

"I was overwhelmed with emotion when I heard all Canadians will have the right to compassion and comfort when it comes to the end of life."

A visibly emotional Taylor thanked members of her family, friends, her legal team, the BCCLA and others for supporting her though her legal fight.

Taylor said her ALS has progressed such that she is restricted to her wheelchair for getting around, needs a feeding tube and is losing her voice. She said she still lives alone with assistance and hopes not to have to go into a care home before the end of her life.

When asked when she thought that time might come, she replied, "I take it one day at a time. I'm here for living now. When it is time, it is God's will alone. I will leave it at that."

On Friday, B.C. Supreme Court Justice Lynn Smith ruled that Canada's ban on doctor-assisted suicide infringes on the rights of the disabled.

Smith ruled that because suicide is not illegal, banning assisted suicide discriminates against the disabled and is therefore unconstitutional.

The judge suspended the ruling for a year to give lawmakers time to change the legislation, but she granted the terminally ill Taylor an exemption to the yearlong suspension, allowing her to make immediate decisions about her future.

Should Canadians have the legal right to assisted suicide? Take our survey.

B.C. Civil Liberties Association litigation director Grace Pastine said the court has given the government a road map for drafting new laws surrounding the right to assisted suicides for the terminally ill, but it is up to the government to set those guidelines.

"Now it is up to Parliament, the ultimate democratic institution, to see that a law is created that upholds Canadian values and that upholds a choice in dignity at the end of life," she said.

On Monday morning the federal Justice Minister Rob Nicholson's office issued a statement saying they were studying the decision.

"We are currently reviewing the court’s 395-page decision. This is an emotional and divisive issue for many Canadians. Parliament voted as recently as April 2010 not to change these laws. The court has ordered a suspension of the operation of its declaration for a one-year period. The deadline for the government of Canada to file a notice of appeal in the British Columbia Court of Appeal is July 16, 2012," said the statement issued by press secretary Julie Di Mambro.

In Vancouver, Taylor said her hope was that the government would not appeal the judge's decision.

"I would hope that they would just let it go and not appeal it. Just be big enough to say, 'Yeah, this isn't right. We can't expect people to die horrible deaths,'" said Taylor.

"I'd really like to see people say assisted dying and stop saying assisted suicide. It is not suicide. There is no comparison ... nobody is helping me commit suicide. They are helping me to die a peaceful death," she said.

Taylor, who suffers from ALS, was one of five plaintiffs who asked the court to strike down the law that bans assisted suicide last November.

Also present at the news conference on Monday were Hollis Johnson and Lee Carter, a couple who helped their aging mother fly to Switzerland for an assisted suicide.