A B.C. school district is investigating after students were asked to find positive stories about Canada’s residential school system for Indigenous children.

'I was just appalled by it,' mom says

A B.C. mother says she is furious after her daughter and other Grade 6 students were given homework asking them to highlight "positive" stories and facts about Canada's residential school system for Indigenous children.

The Abbotsford School District said it is investigating after being made aware of the assignment Wednesday.

Krista Macinnis, 31, said her 11-year-old daughter was given the assignment in a class at William A. Fraser Middle School.

It directs students to: "Write at least 5+ positive stories/facts from the residential schools from three different websites."

Macinnis and her children are First Nations. Her ancestry comes from the Cree and Blackfoot nations.

She expressed her disgust in a TikTok video, decrying the "whitewashing [of] the rape of our culture, the theft of our people and the genocide of just everything in general when it comes to First Nations people."

WATCH | Macinnis explains why she found the assignment so offensive: 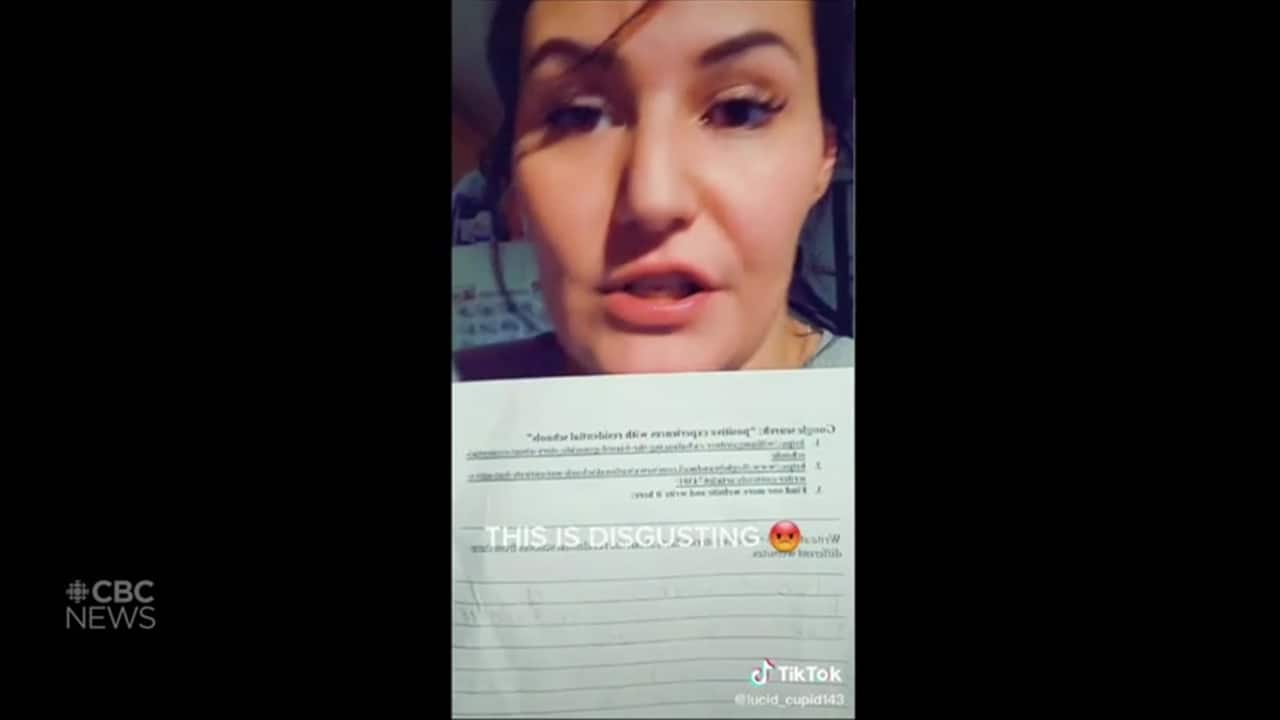 3 months ago
0:36
The mother of a child at W.A. Fraser Middle School in Abbotsford, B.C. shows the handout with the directions, "Write at least five positive stories/facts from the residential schools from three different websites." 0:36

The system has been blamed for damaging Indigenous traditions and family ties.

It is estimated 150,000 youth went through residential schools and that several thousand died in the system.

Macinnis said she first saw the assignment when she was making dinner for her family. Her daughter came to her for help with it.

"I was just appalled by it," she told CBC News. "When I saw it in writing with my own eyes I began to shake uncontrollably. I began to cry. I couldn't believe what I was seeing. I was in complete shock."

Macinnis said she had not yet explained the history and consequences of residential schools to her children.

She says she believes kids should learn about the negative impacts of the schools and sees nothing positive about them.

"We are deeply sorry for any harm caused to the parents, students, families and the Indigenous community at large," Godden said in a statement.

"Assignments like this are not acceptable. This incident is a disservice to the district's commitment to truth and reconciliation."

The district said the assignment is not a reflection of its teaching workforce.

It added: "As this is a personnel matter, no further information is available at this time."

B.C. Education Minister Rob Fleming said the province had contacted the district about the assignment.

"Any teachings that detract or dismiss the realities of residential schools have no place in our education system," Fleming said in his statement.

"It is critically important for students to learn that this past legacy of abuse has created and continue to present a devastating legacy of the multi-generational impacts of residential schools."

Macinnis commended the school for reaching out to her but said she wants more than an apology. She wants to see accountability and to make sure students aren't given assignments like this again.

"I want to know how this slipped through the cracks and was even able to get into the classroom," Macinnis said.

"There needs to be actions behind these words or else nothing is going to change."