A Canadian Coast Guard vessel with more than a dozen researchers on board has returned from an ocean expedition off B.C.'s Central Coast.

A scientific expedition exploring the depths off B.C.'s Central Coast has returned with rare pictures of reefs, rockfish, corals, sponges and basket stars.

More than a dozen researchers on board the Canadian Coast Guard ship CCGS Vector spent the past week in the waters off Klemtu and Bella Bella.

"We didn't know what we would find because almost no scientific exploration has occurred there below 200 metres," said Alexandra Cousteau.

She says the expedition found "large red-tree corals and bubble-gum corals and these wonderful anemones called pom-pom sea anemones that look like pom-poms." 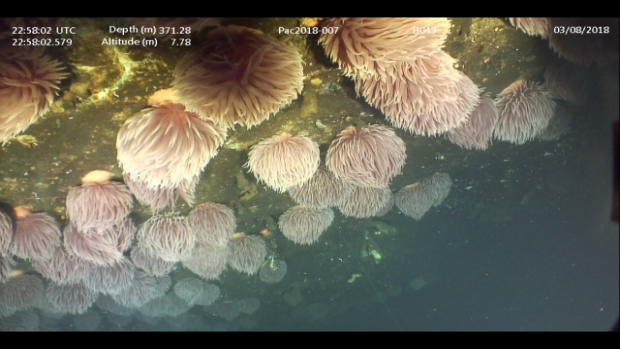 Life below 200 metres in the Central Coast of B.C.

DFO says deep fjord channel environments are unique ecosystems where marine life flourishes. The expedition used a drop camera capable of filming at a depth of more than 500 metres.

The expedition was also a cultural collaboration with local Indigenous leaders.

The areas around the Kynoch Inlet fjords, Seaforth Channel and Fitz Hugh Sound have significance for the Heiltsuk and Kitasoo/Xai'Xais nations.

Fisheries and Oceans Canada says for millennia the nations have been stewards of marine resources in their waters "that are crucial for their cultural and human well-being."

"While there is still much work to do to conserve our marine environment and ensure our Indigenous laws are reflected in all marine management decisions, partnerships like this expedition are important steps toward our conservation and management goals," said Doug Neasloss with the Kitasoo/Xai'Xais Nation as part of a release about the expedition.

DFO says the expedition collected data that will help identify ecologically important areas for marine planning, protect vulnerable species — such as rockfish — and habitat with a high conservation value from human threats.

"Knowing where these rocky reefs and important fish habitats are is really critical in being able to do good marine planning and identify areas that should be protected," said Cousteau.

The federal government has committed to protect 10 per cent of Canada's oceans by 2020.