Red-eared slider turtles, once reared as pets but now released into the wild, are overwhelming local lakes in Burnaby, Granville Island and Stanley Park.

There are no more native turtles left in Stanley Park 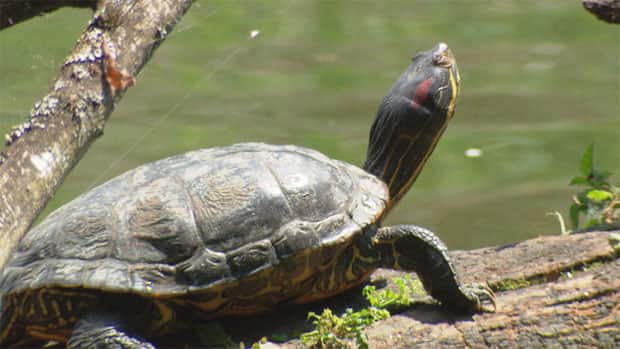 7 years ago
2:07
Pet turtles released in ponds and lakes drive out native species 2:07

Red-eared slider turtles, once reared as pets but now released into the wild, are overwhelming local lakes in Burnaby, Granville Island and Stanley Park, officials say.

"They have a negative impact on our local wildlife by outcompeting for our local resources such as food or places to sit and sun themselves," said Robyn Worcester, conservation programs manager at the Stanley Park Ecological Society.

"They will eat things like tadpoles and fish and other native organisms that need to survive, so they can hurt the populations of existing wildlife."

Like the snakehead fish in Burnaby and University of Victoria's bunny population, discarded pet turtles are becoming big problems as they increase their range.

The turtles are originally from the southern U.S. and Mexico, but they have been brought to B.C. as pets. Clusters of them can now be found in B.C.'s Interior and southern Vancouver Island.

Hilary Wilson has been rescuing tossed turtles for years. So far, she has pulled 200 out of Granville Island's pond.

"They get sick, they get sick very quickly, they can't survive here and they destroy our environment," she said.

Many people don't realize the turtles are choking out the local breed, adds Worcester, who said there are no more native turtles left in Stanley Park.

"We still encounter people calling and and asking if they can bring us their pets," she said. "We say, 'No, please, they're not supposed to be in natural areas.'"

Some animal rescue societies are calling for an outright ban on the red-eared turtles.

To help keep track of the sliders, report any sightings to the B.C. Ministry of Environment.