RCMP Commissioner Bob Paulson tries to get a laugh but ends up being questioned about whether he escaped a speeding ticket because he's the boss.

Speeding anecdote may have undermined his core message of accountability 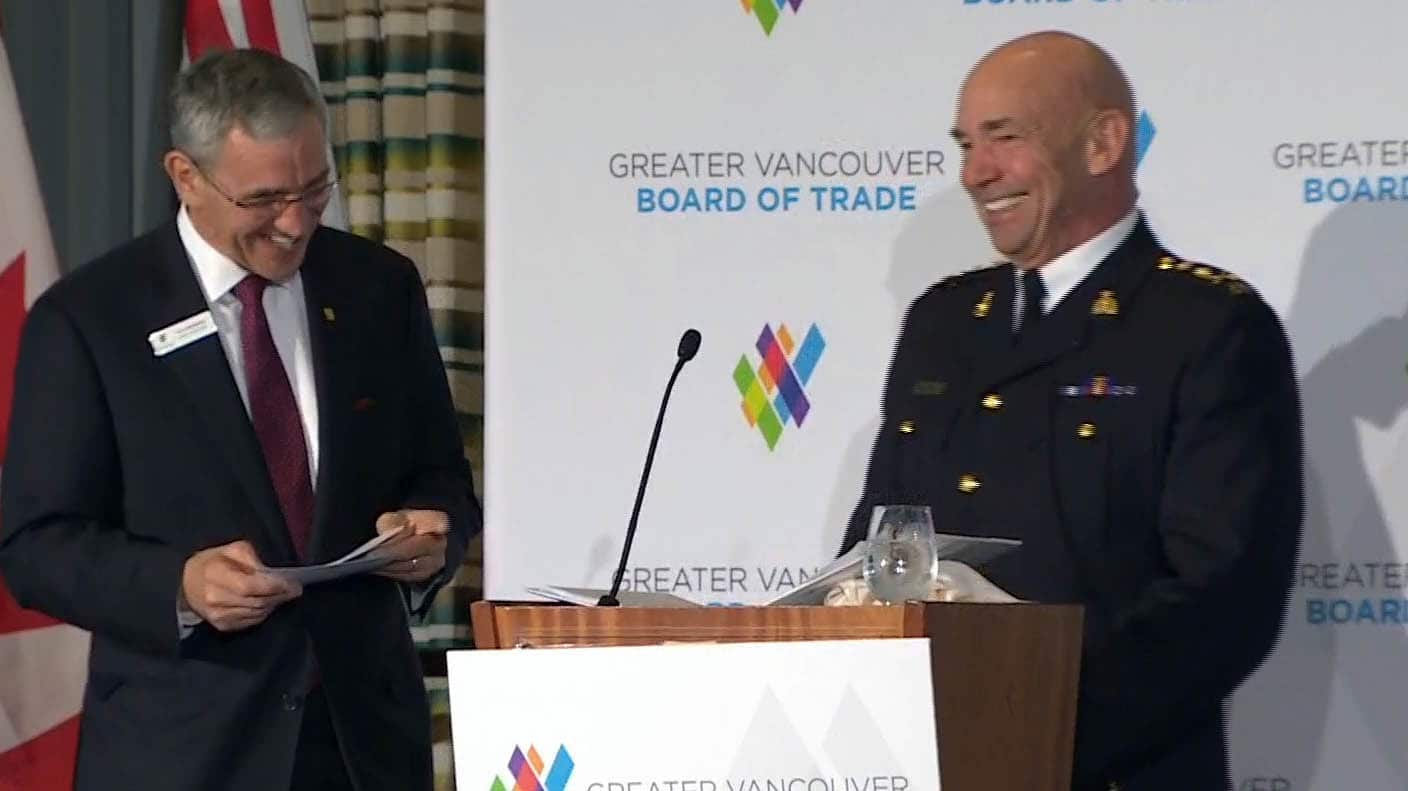 5 years agoVideo
1:59
Bob Paulson told a Vancouver audience a story about his last speeding ticket and reporter Sunny Dhillon of the Globe and Mail asks for more information see what happens next 1:59

It was meant as a bit of a throwaway line to a lunchtime crowd of board of trade types gathered in a Vancouver ballroom to listen to the country's top cop.

RCMP Commissioner Bob Paulson was there to discuss national security in the wake of the Brussels bombing, and also what progress he was making on curtailing harassment and weeding out members who have sullied the force's reputation.

In a lighter moment, he was asked by a member of the audience, when was the last time he had written a traffic ticket to anyone.

Instead of answering the question, the commissioner went on a "bon mot" diversion.

He talked about speeding down B.C.'s Coquihalla Highway with some family members last year and being pulled over by an RCMP officer.

Paulson got some laughs when he mimicked the horrified reaction of the officer who suddenly realized he had just pulled over the big boss and who now faced the decision of whether or not to issue him a ticket.

The tell though, came when the moderator said he wouldn't ask about the dollar value of the ticket. Paulson's expression went from a broad grin to "oh-oh" in a flash, as he seemed to realize he had stepped in it.

But the commissioner was soon back on message track, reassuring the audience the RCMP was in good hands, that harassment, favouritism, and other sins of the past were being dealt with in a firm but fair way.

Paulson, to his credit, seems to enjoy being in front of an audience, delivering his lengthy address off-the-cuff and in a more entertaining fashion than many Ottawa denizens. And the audience seemed to like a cop who didn't speak like a walking news release.

Later, talking to reporters, Paulson was clearly not pleased when the speeding incident came up.

He then went on to other topics, but Globe and Mail reporter Sunny Dhillon asked him to clarify what was now a confusing series of statements.

Finally Paulson said, "It was a joke," but yes it did happen, and he had been given a warning by the officer rather than a speeding ticket.

The final question, which Paulson clearly didn't like, was, "Did you get preferential treatment by not getting a ticket?" Paulson delivered a firm "No" and then, clearly at his limit, ended the news conference.

Paulson was irritated, likely because he was just trying to get a laugh with a folksy little anecdote but was then faced with the reality of nitpicking media appearing to blow it up into a big deal.

But the problem is that the theme of Paulson's speech, and indeed much of his tenure, has been about a national police force that's fair, transparent and accountable.

What the commissioner obviously didn't realize on the fly was that his story may have undermined his core message. If he wasn't accountable, if an officer wouldn't dare write up the boss caught red-handed, where's the veracity in that messaging?

That's not to say he escaped the ticket due solely to his position. Many of us have been pulled over by the RCMP and some of us have been as fortunate as Paulson to drive away with a warning rather than a ticket.

But when you are discussing how everyone in this new RCMP is accountable, it might not be the best plan to talk about how you weren't held accountable, humorous anecdote or not.

In this case, that speeding infraction didn't cost him that day on the highway. But it did catch up with him at, of all places, a board of trade luncheon.