A Vancouver man a took a fur-raising photo on Thursday of a rat in a fridge at a 7-Eleven store in the Hastings-Sunrise neighbourhood.

It's hot, it's sunny, and like most of us, one rat just needed to cool down.

A Vancouver man shot some fur-raising footage on Thursday of a rat in a fridge at a 7-Eleven store in the Hastings-Sunrise neighbourhood.

A picture, which was shared the same day on Reddit, shows the rat nestled next to a row of soda bottles.

Travis Williams, 34, who captured the shot, said he stopped at the 7-Eleven store on East Hastings Street and Lakewood Drive at about 5:30 p.m. with his 10-year-old son.

William said his child was crawling on the ground when he pointed out the large rat.

Watch the rat scurry in the fridge: 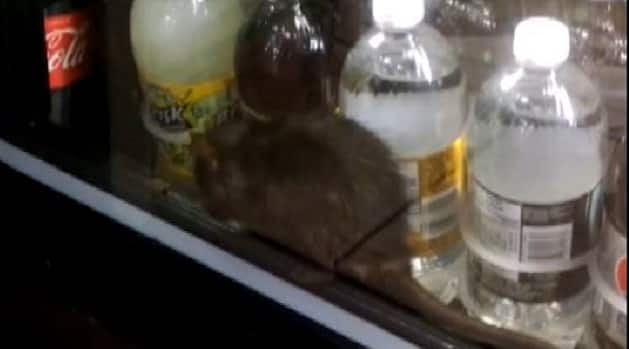 Large rat filmed inside fridge at 7-Eleven in East Vancouver

2 years agoVideo
0:10
Travis Williams, 34, says his son spotted the rodent when they dropped by the store on Thursday. 0:10

"I was a little shocked," Williams said. "My son was more curious. He thought it was kind of amusing that it was in there."

Williams said he notified the staff right away and emailed the chain's corporate office that evening. The office responded and said they would investigate, he said.

"I have pretty bad germaphobia. That's why I really took offence to it," he said. "I know some other people might not care."

A store employee, who declined to be named, said on Saturday that staff called pest control as soon as they were alerted. The rat was found and removed, they said.

The employee said the rat came from outside and entered the fridge when a customer opened the door.

They said pest control sanitized the cooler and will be visiting daily over the next week to check for any more rats.

A Gastown restaurant shut down earlier this year after a customer posted a video that appeared to show a dead rat inside a bread bowl of soup.

Inspectors later found a thick accumulation of rodent excrement in the kitchen used by the restaurant at a second location.

A spokesperson with Vancouver Coastal Health, which oversees food safety in stores, couldn't confirm Friday whether it was investigating.

7-Eleven's corporate office did not respond to a request for comment.