A rare sandhill crane has been fitted with a prosthesis after losing a leg in an accident at a Richmond, B.C., golf course. 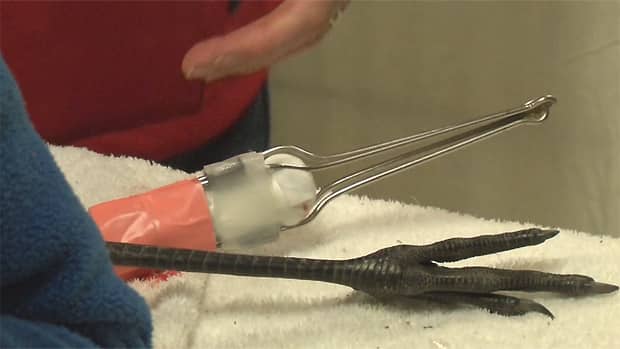 8 years agoVideo
0:56
A sandhill crane has been fitted with a prosthetic limb after its leg was shattered by a stray golf ball in Richmond 0:56

A sandhill crane, a rare sight in the Lower Mainland, is standing up again after losing a leg in an accident at a Richmond, B.C., golf course.

Elizabeth Melnick, who runs a non-profit wildlife rehabilitation centre in Abbotsford, said the bird's leg was shattered in early March when it was struck by a stray golf ball.

"The crane was brought in because he was hit by a golf ball and his lower leg was shattered, so the vet, Dr. Ken MacQuisten, tried to see if it would work possibly with surgery," she said.

"It just wasn't a go. So [MacQuisten] decided to amputate the lower leg and now he's getting a prosthesis put in."

MacQuisten said the leg was badly broken and the limb had died by the time the crane was captured.

"It took about five days to catch him and bring him into the veterinary hospital. So, we had to amputate the foot and now we've fitted him with a prosthesis so that he can balance and walk with it," MacQuisten said.

MacQuisten fitted the bird with a temporary limb for now. He says a permanent prosthetic leg will be attached once the stump is fully healed.

But a small number of sandhill cranes have been living in the Lower Mainland after a pair of captive-hatched birds were released in the area over 30 years ago. The tame birds never reproduced, but they did attract wild sandhill cranes to settle in the region.

In the 27 years Melnick has been running her shelter, she has never come across one before.

MacQuisten also said the crane was a rare subject to work with for other reasons.

"He makes a great subject to see if we can do something to help him with the ultimate goal of sending him back out onto the golf course."