A nuclear scientist at Simon Fraser University says a radioactive isotope that has reached British Columbia from a damaged nuclear station in Japan is no immediate danger to the public. 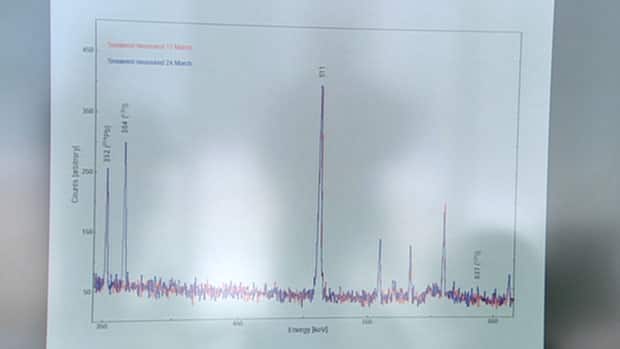 10 years agoVideo
2:30
While nuclear radiation from Japan has been detected in B.C., the low levels do not pose a health risk, the CBC's Stephanie Mercier reports 2:30

A research team at Simon Fraser University has detected an increase in a radioactive isotope they say reached British Columbia from the damaged nuclear station in Japan.

SFU nuclear scientist Kris Starosta said he's confident the beleaguered Fukushima Daiichi station, which was struck by a devastating tsunami following a magnitude 9.0 earthquake on March 11, is responsible for the increase in iodine-131 in rain and seawater samples detected in their studies.

"The only possible source of iodine-131 in the atmosphere is a release from a nuclear fission," Starosta said. "Iodine-131 has a half life of eight days. Thus we conclude the only possible release which could happen is from the Fukushima incident."

However, he said, there is no immediate danger to the public.

"As of now, the levels we’re seeing are not harmful to humans. We’re basing this on Japanese studies following the Chernobyl incident in 1986 where levels of iodine-131 were four times higher than what we’ve detected in our rainwater so far," Starosta said.

"Studies of nuclear incidents and exposures are used to define radiation levels at which the increase in cancer risk is statistically significant. When compared to the information we have today, we have not reached levels of elevated risk."

The jet stream is carrying the radiation to North America from Japan. Most of the radioactivity disperses in the atmosphere and falls over the Pacific Ocean, but some has reached the West Coast, falling down with rain and mixing with seawater, the researchers say. It’s also accumulating in seaweed.

The rainwater tested was collected at SFU’s campus on Burnaby Mountain and in downtown Vancouver, the researchers said, while seaweed samples were collected in North Vancouver near the SeaBus terminal in Burrard Inlet. Seaweed samples taken from Barkley Sound on Vancouver Island’s west coast are also being tested.

Starosta predicts iodine-131 will be detected in B.C. three to four weeks after the Fukushima nuclear reactor stops releasing radioactivity into the atmosphere.