The trapping and painful death of racoon in a residential Surrey, B.C., neighbourhood has renewed calls for a provincewide municipal ban on leghold traps. 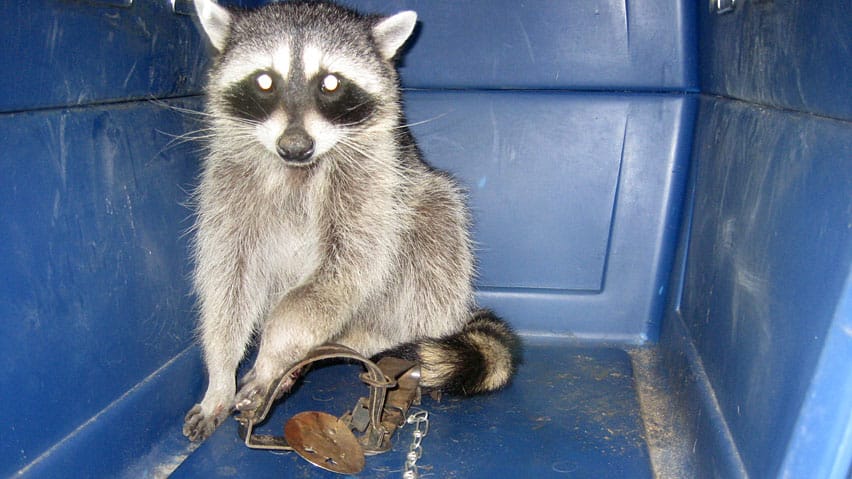 10 years ago
2:11
The trapping and death of a raccoon in Surrey, B.C., has renewed calls for a municipal ban on leghold traps, the CBC's Susana da Silva reports 2:11

The trapping and painful death of racoon in a residential Surrey, B.C., neighbourhood has renewed calls for a provincewide municipal ban on leghold traps.

The animal was discovered by the Owen family, as it was trying to climb a fence in their yard with the trap still clamped on a rear leg.

"His tail was on the ground, he couldn't get up because the trap was too heavy," said six-year-old Tommy Owen.

The animal eventually crawled its way into their shed and that's when the Owens called the SPCA and Langley's Critter Care Wildlife Society.

It took two people to remove the strong trap from the racoon's leg, said Angela Fontana of Critter Care.

"The paw was actually crushed, all the bones were broken," said Fontana. "The trap has prongs on it that almost severed the paw in half… It was quite gruesome."

She said the animal was too damaged and weakened to be saved and had to be put down.

The Fur-Bearer Defenders Association has posted a $2,500 reward for information leading to the person who set the trap.

The association is calling on Surrey to ban all leghold traps, following on the lead taken three weeks ago by ago by the town of Gibsons, which became the first B.C. city to issue such a ban, which included snare traps .