Parts of central and northeastern B.C. continue to battle flooding and road washouts after heavy rain deluged the region over the weekend. 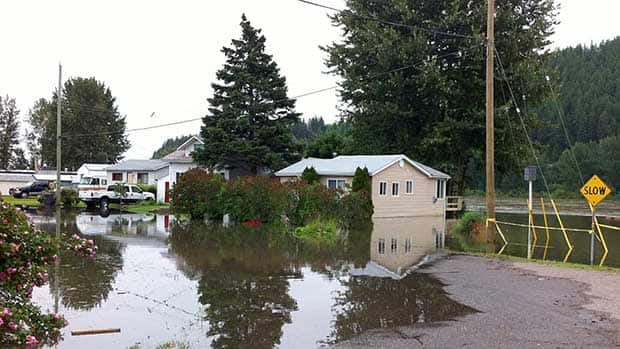 10 years ago
1:48
More than 20 Prince George homes are under an evacuation order as concern grows for communities downstream, the CBC's Susana da Silva reports 1:48

Parts of central and northeastern B.C. continue to battle flooding and road washouts after heavy rain deluged the region over the weekend.

A flood warning in the central interior of B.C. has been extended from Prince George to Quesnel, where the Fraser River was expected to peak on Monday morning.

On Sunday afternoon, about a dozen Prince George homes along Farrell Street were evacuated when water levels reached 9.61 metres, more than two metres above the average for this time of year.

A local state of emergency remains in effect and a reception centre has been set up at Prince George city hall.

In northeastern, B.C., a flood warning also remained in effect for the central and southern Peace River regions, after up to 80 millimetres of rain deluged the area over the weekend, causing floods and washing out roads and highways.

Highway 52 between Dawson Creek and Tumbler Ridge has been closed indefinitely after a heavy rainfall washed out a culvert and a section of pavement. Highway 16 has also been closed, according to reports.

There are also still long delays on Highway 97, the main route north from Prince George and pilot cars are guiding cars through the area, where previous rains washed out the road in about 15 separate locations.

Shorty Smith, the emergency program co-ordinator for the City of Dawson Creek, said the heavy rains cause some road closures and voluntary evacuations in that community.

"We did have quite a bit of water over the weekend and closed about four roads in the community, but they've all since reopened, said Smith.

"We had approximately three families that were evacuated from their homes," he said. "All three actually self-evacuated."

More rain was forecast Monday morning for Dawson Creek and Fort St. John and a further 20 millimetres of rain was expected by Wednesday.

"It's not raining at this time. I guess Mother Nature's going to give us a break for a few days," said Smith.