B.C. Premier Christy Clark has promised to change the Medical Services Plan premiums before next May's provincial election. But Clark won't provide any specific details on how she plans to change the health tax that brings in $2.4 billion annually. 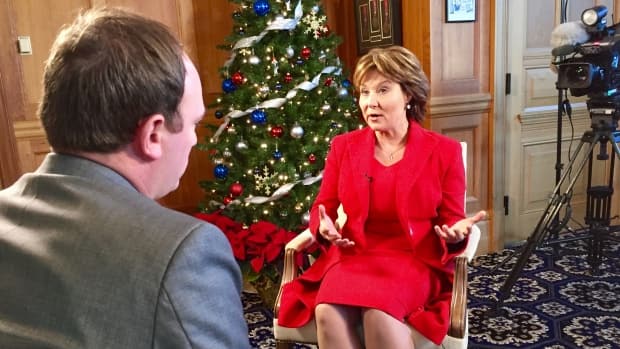 B.C. Premier Christy Clark has promised to change Medical Services Plan premiums — which she described as unfair — before next May's provincial election.

But Clark would not provide any specific details on how she plans to change the health tax, which brings in $2.4 billion to provincial coffers each year.

"One of the proposals has been, 'Let's take MSP and put it in the tax system,'" Clark said in a year-end interview with CBC.

"It moves one tax from here over to here. Well, I don't think that is what people say when they want to get rid of MSP," said Clark.

"They want us to trust them to be able to spend their money better than government can. And I agree with that.

"I would say there are a lot of taxes I want to get rid of because I think we should be figuring out how to get more money back into people's pockets."

The MSP changes are expected to be announced in the 2017 provincial budget next February so they can be introduced three months before the election.

Major changes in the MSP premium plan have been building for nearly a year as the province tinkered with changes to monthly payments.

The province also increased the rates for more than 500,000 British Columbians.

A senior, or senior couple, who earn more than $51,000 combined, or an individual or couple who make more than $43,000 have seen their bills rise by about $14 a month. Those bills have arrived in peoples' mailboxes this month.

The B.C. NDP has also vowed to make changes to MSP. Leader John Horgan will reveal his plans for the premiums following the provincial budget in February.

Horgan says it is hard for British Columbians to trust the Liberals considering the government has increased the rates by four per cent a year every year since 2008.

"They are doing away with the couple rate and they are imposing an additional cost of couples without children," said Horgan.

"When we get inundated with feel good Christy-Clark-is-doing-right-by-you ads that you are paying for, remember the 500,000 other couples that are paying more as Christy Clark pretends others are paying less."

Clark's government is also considering changes to who pays the province's property transfer tax. That tax has been described by some as a cash grab by the government, which adds additional costs to the purchase of homes.

Asked whether she intended to get rid of the unpopular tax, she replied, "That's not part of the agenda at the moment."

But she did open the door for changes down the road.

Currently the government offers the First Time Home Buyers' Exemption that provides a discount to the tax for homes valued at less than $500,000.

She said the government would like to reduce the number of home buyers who have to pay the property transfer tax.

"If we were going to start thinking about next steps on that, we would probably do more on where we are, which is creeping up the numbers of home buyers that don't have to pay the property transfer tax at all," said Clark.

Clark mentioned during a speech to the Surrey Board of Trade on Feb. 19, 2015 that the tax could be reduced or eliminated some time in the next few years — but not before the provincial debt is under control.

In September, Finance Minister Mike de Jong provide forecasted the property transfer tax will bring $2.2 billion into the treasury this year, up from the $1.2 billion predicted in the budget introduced in February.