B.C. premier vows province will meet the challenge of COVID-19

B.C. Premier John Horgan, who wrapped up a first ministers meeting Friday morning, provides an update on what the province is working on in response to the spread of COVID-19.

British Columbia's premier, John Horgan, called the spread of COVID-19 across the province and country "uncharted territory" in an update following a meeting of first ministers on Friday.

Horgan noted the meeting, which had to be held via teleconference due to Prime Minister Justin Trudeau being under self-isolation after his wife Sophie tested positive for coronavirus, had a "unanimity of purpose."

"This is an unprecedented period in our history," Horgan said. "But it is a challenge we will take up together."

Limiting transmission on ports of entry

Horgan says the extremely close relationship between British Columbia and Washington state — which has been an epicentre of coronavirus cases in the U.S. — has put the province "in a unique situation."

"We are concerned about points of entry," Horgan said. "Border crossings, airports, ferry terminals when it comes to Vancouver Island, these are areas I wanted the federal government to up their game and I made it pretty clear to the prime minister."

Noting that boats and cruise ships carrying more than 500 people will be banned from docking at Canadian ports until July, Horgan says B.C. has its own ferry transportation system — B.C. Ferries.

He said the province had asked for leniency to allow passengers to stay in their cars (as opposed to going up to the deck as they are currently required) but they have not been granted permission by Transport Canada. Horgan says he has redoubled his efforts on the request in the interests of social distancing.

Currently, all travellers arriving in Canada from international points are being asked to consider self-isolating for 14 days as a precaution.

Horgan says it's his hope that people will do the right thing and voluntarily self-isolate in order to protect their families, their neighbours and their community.

"Having said that, Dr. [Bonnie] Henry [B.C.'s provincial health officer] has the authority to act, if required but at this point ... we're hopeful people will comply," he said.

Horgan says the province was working with the federal government to expand Employment Insurance benefits as much as possible to cover the widespread economic impact of the virus.

He added B.C. Finance Minister Carole James would be working closely with her federal counterpart, Bill Morneau, on what can be done.

"We'll be monitoring daily ... revenues in and expectations out," said Horgan, with regards to whether the province would continue to have a balanced budget.

"[But] I did not seek election just to balance the budget ... it was to deliver services to people."

Horgan says resources from the $1 billion federal package, $500 million of which goes to the provinces and territories, will be allocated to the province on a needs based scale instead of a per-capita basis.

"British Columbia has been at the forefront in terms of testing and we have a significant number of cases," he said, noting while Ontario has more cases, it has three times the population of B.C.

As for reports of British Columbians hoarding and reselling supplies like hand sanitizers and wipes, Horgan had some choice words.

"I think that's just offensive and most people would bristle at that," he said. 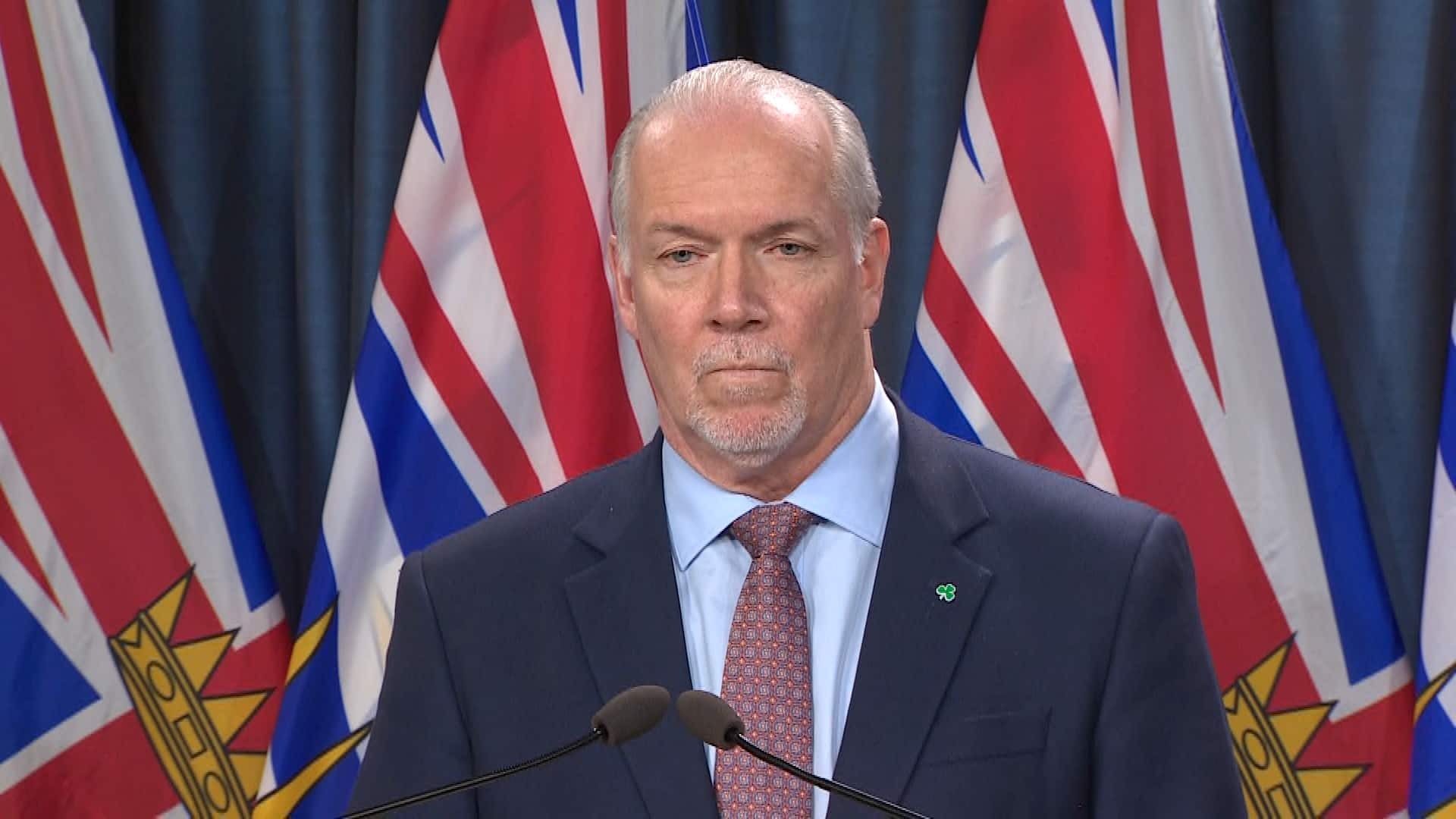 7 months ago
0:33
Premier John Horgan added there's a 'special place' for those who exploit essential goods that others may need. 0:33