Mayors and councillors from across British Columbia kicked off the annual Union of B.C. Municipalities convention by crowding into a debate calling for the decriminalization of marijuana. 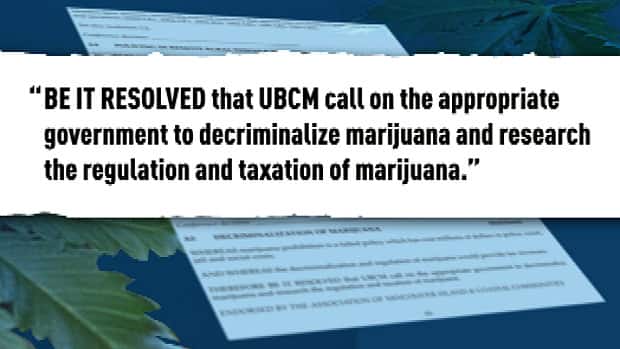 8 years ago
2:10
B.C.'s municipal leaders are asked to take a position on decriminalizing marijuana 2:10

Mayors and councillors from across British Columbia kicked off the annual Union of B.C. Municipalities convention by crowding into a debate calling for the decriminalization of marijuana.

The noted HIV/AIDS expert told the crowded room that drug gangs are killing people and municipalities have the power to lead the way towards decriminalizing pot.

He caused a roar of laughter among the audience of more than 200 when he said smoking pot is stupid — and it makes you stupid.

"Doesn't feel to me like that's a highly successful example of public policy. You all govern and live with the consequences of this disastrous and expensive failure of public policy and it's entirely appropriate for you to take a stand on behalf of the citizens of the communities you represent, for change."

Plant says the debate comes as Washington looks at a tax and regulation plan, and this is an opportunity for a coordinated strategy on both sides of the border.

"The old argument that we can't do anything here in Canada because we can't get too far ahead of American public policy is increasingly no longer relevant," he said.

"Americans are not just playing catch-up, but in some states in the United States I think they are leading on this public policy reform."

But Pat Slack, the commander of a Drug and Gang Task Force in Washington, says municipal leaders are being misled about the effects of legalizing pot.

"They're looking at this issue as a big cash cow, that's going to bring in billions of dollars. We're gonna be able to fix the roads and build the bridges and do all that stuff — at the cost of what?  One youth? Ten youth? Two hundred youth?"

Municipal leaders vote on a resolution calling for decriminalization of marijuana on Wednesday.

The marijuana resolution is one of more than 200 due to be considered by the estimated 1,500 delegates attending this year's convention.

On Thursday, NDP Leader Adrian Dix will address the delegates followed by Premier Christy Clark, who will give the closing address on Friday.

Many of those municipal representatives may be hoping to score some much-needed cash for projects in their hometowns when they meet with various provincial ministers.

But Community, Sport and Cultural Development Minister Bill Bennett is already warning delegates he's ready to listen, but he's not ready to pull out his cheque book.

Instead Bennett says the Liberal government intends to tell some municipalities to get their own spending in order before asking for more provincial funding.

He says unlike past conventions, when the province rolled out major spending plans or tax cuts, saving money will be the focus of this year's event.