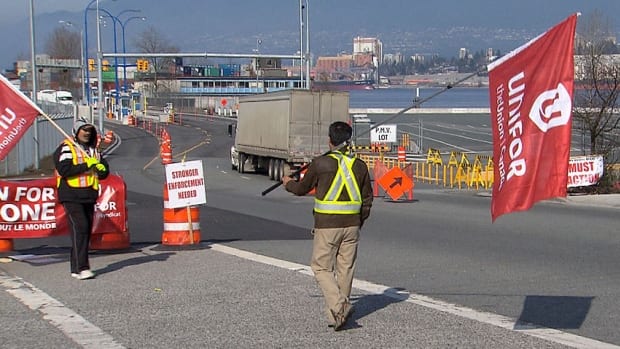 At a news conference in Vancouver Thursday afternoon, Stone told reporters that if the dispute is not settled within the next 24 hours, ships will begin diverting to Seattle.

Stone says federal and provincial officials worked late into the night to come up with 14 proposals to present to striking container truck drivers, but first the federal transport minister has to sign off on the plan.

"We've made this our top priority to get a new proposal, a joint action plan in front of the truckers for their consideration," Stone said. "We now call on the federal government to do the same."

'Port is on its knees'

Noting the impact on the overall economy, Stone is asking Raitt to get on a plane as soon as possible and come to Vancouver. He says this dispute can't wait.

"This is Canada's largest port and the port is on its knees. We received word this morning that within 24 hours ships will be diverted from the Port of Vancouver and will be diverted to Seattle."

Port Metro Vancouver is the country's busiest port and the strike by truckers is impacting $100 million in goods every day.

The strike started last week when non-union container truckers withdrew their services. It picked up steam this week when the non-union truckers were joined on Monday by unionized truckers.

The truck drivers are demanding standardized rates of pay across the trucking sector to prevent undercutting and a reduction in wait times at the port.