Police are investigating a confrontation caught on video in a Richmond parking lot Friday afternoon, where a woman is shown swearing and yelling racial slurs over a parking dispute.

Police are investigating a confrontation caught on video in a Richmond, B.C., parking lot Friday afternoon that saw a woman yell racial slurs at a family over a parking dispute.

The video, which initially circulated on the social media platform WeChat, shows two cars parked with their front bumpers touching outside the Richlea Square Shopping Centre.

One of the cars had crossed over the painted, white parking lines. When confronted about it, the driver of the car parked over the lines gets angry.

"You don't know a damn thing, go back to China where you belong," the driver, a Caucasian woman, says in the video. 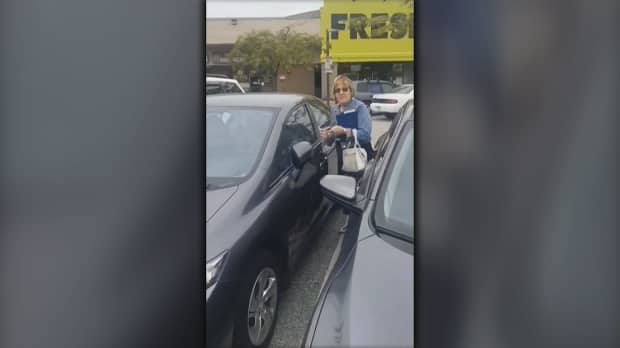 2 years ago
0:15
Police are investigating a confrontation caught on video in a Richmond, B.C., parking lot Friday afternoon that saw a woman yell racial slurs at a family over a parking dispute. 0:15

She swears numerous times and hurls several racist slurs toward the group filming as she gets into the vehicle.

"We hate you people, go back," she says.

Richmond RCMP Insp. Sunny Parmar said they are aware of the video and are looking into it, and have contacted everyone involved.

Amy Xu, who filmed the incident, was at the mall to accompany her mother to a doctor's appointment and do some shopping with her three-year-old daughter.

Xu said she noticed the cars touching when she returned to the parking lot and waited for the other driver, to try to resolve the issue.

"She just denied and asked where I'm from," Xu told CBC. "I said 'This is not the point, the thing is that we've got an accident here.'"

Xu started filming when the woman began yelling and swearing.

"My daughter was so frightened," she said.  "The first thing for me to do was calm down my daughter, not argue with her.

"I'm still mad about this," Xu said. "My kid was there and this is a really bad example for her. She was frightened and can't sleep now."

Xu's husband, Fang Xu, said Saturday morning that he was filing a formal complaint with the RCMP.

CBC News spoke with a woman by phone who identified herself as Carla Waldman and said she encountered a woman in the parking lot after grocery shopping.

She confirmed her car was touching the other woman's licence plate, but said she does not regret the racist language she used in the video.

"I do not regret anything I said to her because she was a very mean person," Waldman said.

"I don't care what they're calling me. I am not a racist person."

RCMP are asking the public to refrain from commenting about the incident on social media to protect the integrity of the investigation.