Woman killed in hostage-taking at Surrey home had 'heart of gold,' friends say

Two people are dead after a hostage-taking that began late Thursday and ended Friday morning at a home in a residential neighbourhood in Surrey, B.C. CBC News has learned the identity of one of the deceased.

A man and a woman are dead after a hostage-taking that began late Thursday and ended Friday morning at a home in a residential neighbourhood in Surrey, B.C.

CBC News has learned through friends and neighbours that the woman, who had been taken hostage, was Nona McEwan.

She previously worked at the Dell Lanes bowling alley in North Surrey. Former colleagues were distraught about what had happened and described her as having "a heart of gold."

Police have not identified the hostage or hostage-taker, though during the standoff they were heard, according to neighbours, to be addressing someone named "Randy," who was inside the home, via bullhorn.

McEwan's friends said her boyfriend was Randy Crosson. They said McEwan and Crosson had a difficult relationship.

Surrey RCMP were called to a house in the 13300 block of 98A Avenue around 9:30 p.m. PT on Thursday. Officers arrived to find "a barricaded male and female hostage" inside the house, according to a statement released late Friday morning.

The statement said officers tried through the night to resolve the situation, but entered the home at 7:30 a.m. Friday.

"A confrontation with the barricaded male ensued," the statement said. "The male sustained a fatal gunshot wound and was pronounced deceased at the scene."

A woman was also found with serious injuries and later died in hospital.

MacDonald confirmed shots were fired, but it's unclear how the man and the woman died.

"We know police took shots, but we don't know if they're the ones that caused injuries to the male. We're still trying to determine that. It's obviously still very early in the investigation," he said.

RCMP said "the scene and situation" were contained and there was no further risk to the public.

Drivers and the public are being asked to avoid the area as police investigate.

Cheryl Lewis, who lives in a nearby home with her 25-year-old daughter, said she was in her basement when she heard police and what she believed to be gunshots just after midnight.

"Police came and asked me if any bullets hit my house this morning," she said, adding that none did.

Another resident, Roger Brouillette, said the area isn't unsafe but he does see some crime.

"I was thinking it was probably a drug dealer or something like that because the area where I am now has lots of things like that," Brouillette said.

"I hear, boom, three times, from the house and after that, police goes inside."

Sabine Roehling described a lengthy negotiation between police and a person inside the house. 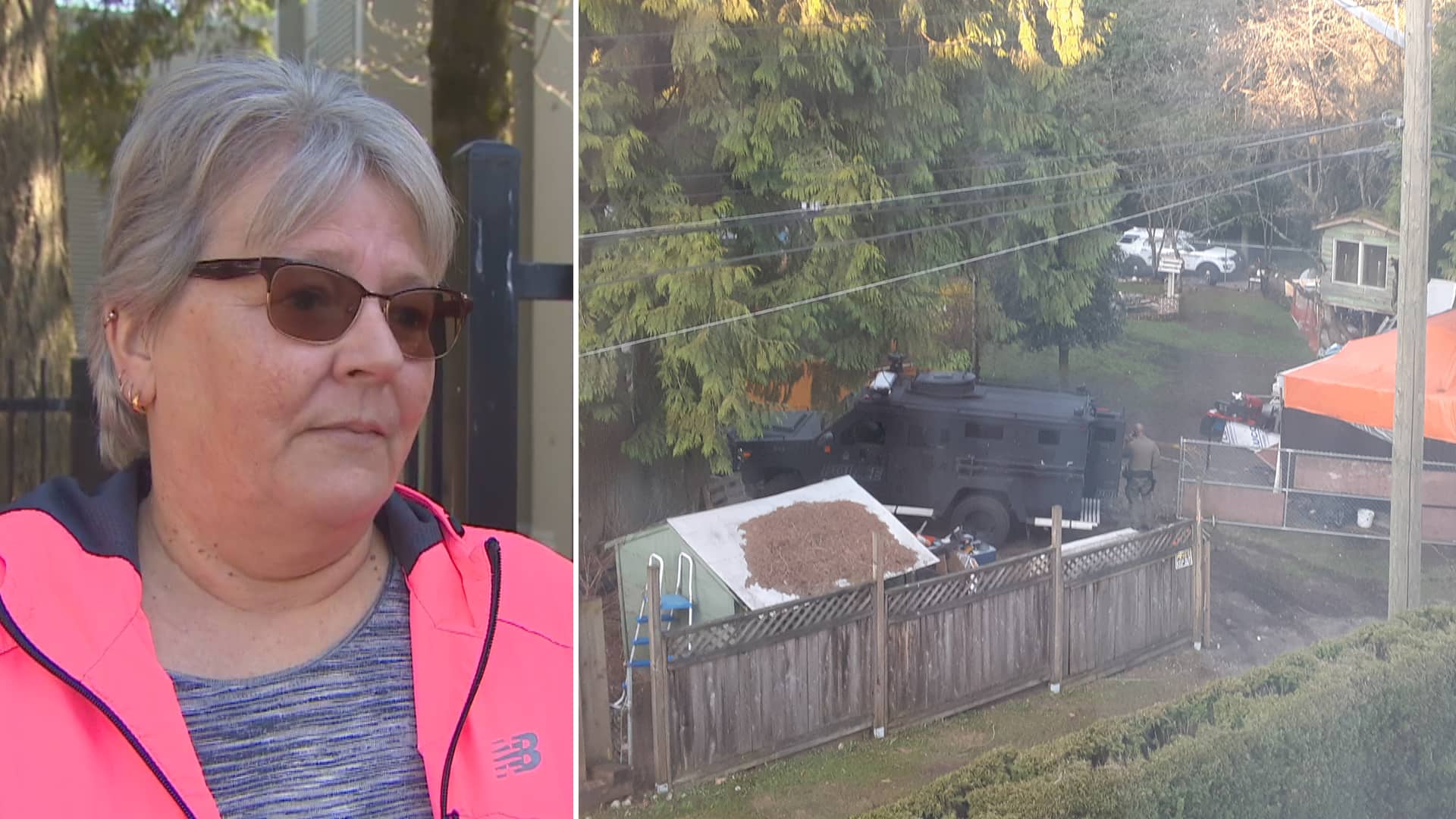 2 years agoVideo
2:48
Sabine Roehling describes how the hostage situation in Surrey played out as she listened to it unfold from her nearby home 2:48