'Not there please,' researchers yell at polar bears to get them to stop 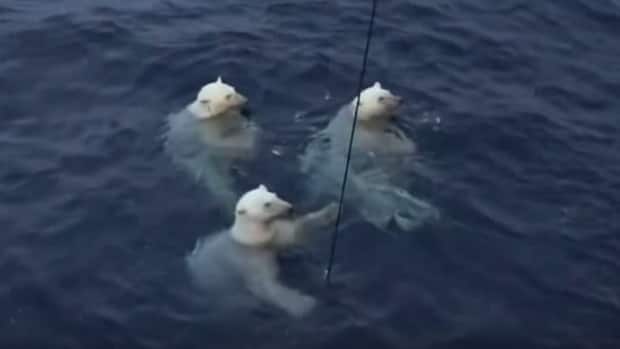 A team of Canadian researchers was surprised to find three curious — and possibly hungry — polar bears gnawing on expensive research equipment in the middle of the Beaufort Sea.

Video captured by Kathryn Purdon, a University of Victoria undergraduate student, features researchers yelling and waving their arms in an effort to get the bears to stop.

"Not there please, please bears, come on, go go go!" researchers plead in the video.

Fortunately, the cable wasn't damaged and the expensive instruments attached, valued at $200,000, were spared.

"It would have really damaged the potential for us to continue working on the expedition. It would've been quite tragic, and you can hear that in the voices," said Jay Cullen, a chemical oceanographer at the University of Victoria.

Cullen is part of the Canadian Arctic Geotraces expedition, a group trying to better understand the impact of climate change on Arctic marine life.

Shortly after the video ends, the bears appeared to lose interest, leaving researchers to quickly retrieve the equipment and sail off, Cullen said.

Researchers believe that the polar bears were just curious.

"They really weren't distressed," Cullen said of the mother and two cubs.

Cullen said some viewers have been concerned for the well-being of the polar bears, but experts he spoke to say the bears looked healthy.

Hear the full interview, Trio of polar bears gnaw at Canadian's research cable in beaufort Sea, with host Gregor Craigie on CBC's On The Island.