A midget hockey player for the Surrey Hurricanes is suspended for punching a linesman after a heated game against the Prince George Cougars. 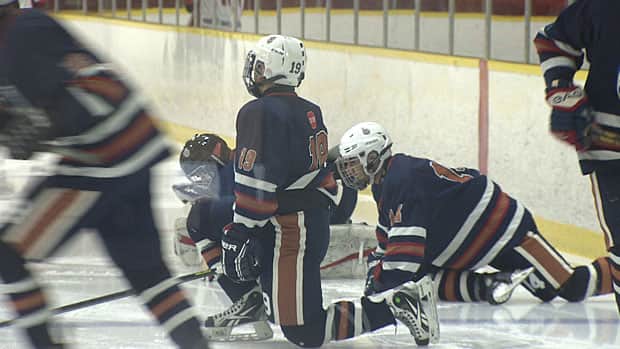 7 years ago
2:26
Surrey Hurricanes player was suspended after hitting a linesman 2:26

A midget-division hockey player in B.C. has been suspended for punching a linesman after a heated game Sunday between his Surrey Hurricanes and the Prince George Cougars.

The incident occurred after the game at the Richmond International Bantam Hockey Tournament and, though accounts differ, appears to have involved the player, a linesman and the referee. The teenager allegedly hit the linesman when he stepped in to break up an on-ice skirmish.

Witnesses say the linesman hit the ice and the player was swinging his arms wildly at him until they were broken up. The linesman was sent to hospital and released.

Randy Potskin, coach of the Prince George Cougars, was shocked at what he saw on the ice.

"[The player] went after the referee initially and then the linesman stepped in and he got the brunt of it and he wouldn't stop. He would not stop. He wanted a piece of somebody," Potskin told CBC News.

'Unacceptable at any level of hockey'

Parents watching the game said the incident came after a highly emotional game. Steve Vorley, the father of another Surrey player, said he had never seen anything like it.

"Not after the whistle blows and the game ends, but there were lots of emotions throughout the game. I guess that is what happens," said Vorley.

​Potskin said it has been years since he witnessed that level of aggression, especially after a game and directed at an official.

Surrey Hurricanes coach Scott Sparkman said the incident was overblown and he never saw his player throw a punch.

"I saw a scrum ... My main concern was that my player was acting inappropriately in a scrum," Sparkman told CBC News.

Sparkman said he suspended the teenager "because he's in my doghouse."

BC Hockey, an organization governing all levels of amateur hockey in B.C., has started investigating the incident, said Barry Petrachenko, the group's executive director.

The investigation will take several days and is likely to include a hearing with the player.

We've never had this type of thing happen before, and so we'll be kind of charting a new path with it.- Barry Petrachenko, BC Hockey's executive director

Petrachenko said this type of incident is unprecedented for the organization.

"We've never had this type of thing happen before, and so we'll be kind of charting a new path with it," he said.

A decision will be made in the next seven to 10 days. Petrachenko said he hopes the decision will act as "a little bit of a deterrent in the future."

"We have to find a balance between having something that has no effect on them because it's so severe ... and the fact that I think we all agree this is a pretty terrible situation and one that has to be dealt with very, very sternly," he said, adding a lifetime ban is an option that has not yet been ruled out.

Richmond RCMP are not investigating and said no charges are likely for the teenage player.

Meanwhile, the linesman will not be able to referee for the remainder of the Richmond International Ice Hockey Tournament, one of the biggest events of the year.

The midget division of minor league hockey is aimed at players aged under 18, usually between 15 and 17 years old.