Pipeline explosion near Prince George might have been prevented by more frequent inspection: TSB

A fiery pipeline explosion near Prince George, B.C., happened after the line's operator improperly delayed a scheduled hazard management inspection, an investigation by the Transportation Safety Board (TSB) has found.

A fiery pipeline explosion near Prince George, B.C., happened after the line's operator improperly delayed a scheduled hazard management inspection, an investigation by the Transportation Safety Board (TSB) has found.

The explosion in 2018 was caused by stress cracks in the pipe, according to the TSB's report. The blast sparked a huge fireball and forced more than 100 people from their homes. As well, damage to the pipeline choked natural gas supply across the province and into the U.S. for months.

The report released Wednesday found the risk of the blast in Shelley, B.C., in 2018 was missed because the operator, a subsidiary of Enbridge, postponed an inspection by several months before the explosion.

"It's jaw dropping," said Malcolm Macpherson, the legal adviser to the Lheidli T'enneh First Nation, the community closest to the blast. "That was downright scary to read. There were some very significant safety protocol breaches that were identified by the Transportation Safety Board and certainly not what one would expect from a world class pipeline operator."

"You'd expect that perhaps in a Third World country, but not in Canada," said Macpherson.

"Our concern is the safety of our members and other people living close to pipelines," said Poutney.

Enbridge is now apologizing to the people who fled their homes after the explosion.

"We know this incident has caused significant concern and disrupted the lives of many people in the area," Enbridge vice-president Michele Harradence said Wednesday morning. "We really want to apologize for that. We've learned from this incident and we've taken steps to ensure the safety of our natural gas system.

But that safety step came too late to mitigate the risk of this explosion.

A senior pipeline investigator with the  TSB said there is a process to follow for companies looking to defer inspections. They have to identify requirements for the deferral, run a technical assessment to make sure a deferral may be safe and obtain appropriate sign-offs.

"In this case, we found the deferral occurred without having those items done properly," Jennifer Philopoulos told CBC.

No one was hurt when the 36-inch (91-centimetre) Enbridge line blew apart and caught fire on Oct. 9, 2018, but more than 100 people living within a two-kilometre radius evacuated their homes as a precaution.

WATCH | Video of the fire from Terry Teegee, regional chief at the B.C. Assembly of First Nations: 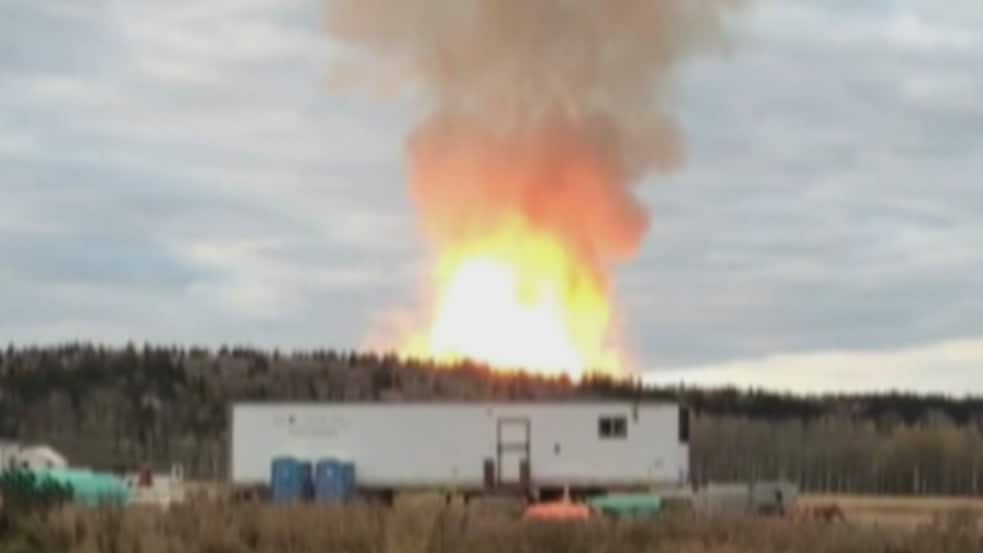 9 months agoVideo
0:16
A pipeline explosion ignited a fireball near Prince George, B.C., on Oct. 9, 2018. An investigation later found the blast was caused by stress cracks in a portion of the pipe. 0:16

The amount of natural gas flowing through the province also dropped after Enbridge halted transport on the ruptured line, as well as a neighbouring 30-inch (76-centimetre) line. British Columbians were temporarily asked to avoid "non-essential" use of natural gas, with utility FortisBC only receiving 40 per cent of its usual gas flow.

People living kilometres from the explosion site described hearing a thunder-like boom from the blast before looking out their windows to see an enormous, orange fireball in the sky. The force of the blast rattled windows and covered nearby homes on the Lheidli T'enneh reserve in ash.

The months-long TSB investigation launched afterward found the outer surface of the relevant section of pipeline was riddled with stress corrosion cracks before the explosion.

The polyethylene tape used to coat the outside of the pipeline had also deteriorated over time, peeling away from the metallic surface and allowing moisture from surrounding soil to eat away at the pipe walls.

The fissures grew over time, lowering the capacity of the pipeline as it continued to run at its normal operating levels.

The pipeline was operated by Westcoast Energy Inc., a subsidiary of Enbridge. The TSB said Westcoast did have a hazard management plan in place to monitor the line for stress corrosion, but the extent of problem on the section that exploded "was not identified."

"The model used to predict crack growth did not take into account all potential uncertainties in the predicted crack growth. This resulted in cracks growing at higher rates than the model predicted," the report said.

As the cracks continued to grow underground at a critical rate, Westcoast postponed a pipeline inspection scheduled to happen in 2017 until the fall of 2018.

"As such, the existing cracks remained undetected," the TSB said.

The blast blew a crater in the earth and burned surrounding trees, the report said. The hole in the ground was about 35 metres long, 13 metres wide and had a peak depth of about nine metres.

On Wednesday, an Enbridge senior vice-president said the company knew there was a risk of stress-corrosion cracks.

"That's a known threat to pipeline integrity … it's one that had been identified to look for," Michele Harradence told CBC's Daybreak North on Wednesday.

"In this case, despite using the best available tech that was available to inspect the pipeline at the times that we did, the rate of growth of the cracking … it grew faster than we anticipated it would."

The Transportation Safety Board was called to investigate as the agency investigates any incident involving federally regulated modes of transport. Pipelines are regulated by the federal government and are a method of transportation for goods, though pipeline-related TSB inspections are relatively uncommon.

The board said it sent Enbridge a pipeline safety advisory on June 26, 2019, during the course of the investigation. The notice said the company "may wish to review" its managing stress corrosion on at-risk pipelines.

Harradence said Enbridge now has a "much more aggressive" inspection program in place, but did not provide an inspection schedule.

"Significant portions of all of our B.C. system … virtually all of it has been re-inspected," she said.

The TSB said Enbridge has also implemented clearer expectations for emergency response exercises, after the report found "nearby communities and operators of nearby pipelines" were not included in previous exercises run by the company.

The Lheidli T'enneh First Nation has claimed Enbridge did not have an effective emergency response plan for in place for vulnerable members. In February 2019, Chief Dominic Frederick said there had been almost no communication between the First Nation and Enbridge since the explosion. A Lheidli lawsuit against Enbridge over the pipeline explosion is still ongoing.

With files by Betsy Trumpener