Pet medicine much cheaper from pharmacies and wholesalers

A CBC News investigation has found pet owners could save hundreds of dollars on medications and supplies if they buy them at pharmacies and wholesalers, rather than at veterinary clinics. 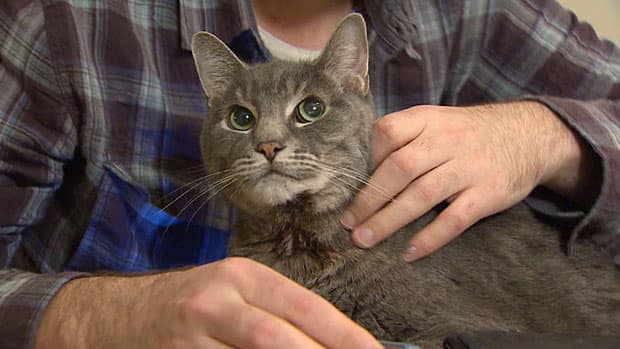 8 years agoVideo
3:27
Drugs may be much cheaper at your neighbourhood pharmacy than from your veterinarian 3:27

A CBC News investigation has found pet owners could save hundreds of dollars on medications and supplies if they buy them at pharmacies and wholesalers, rather than at veterinary clinics.

But veterinarians claim the higher prices they charge help support their clinics, which they say operate on low profit margins with expensive overheads.

Cat owner and blogger Nathaniel Christopher said it's hard to make ends meet and still keep up with his cat's veterinary bills and twice-daily injections of insulin.

He estimates he is spending $225 a month on vet bills and Lantus insulin to keep his diabetic cat Khan alive.

"I have to give him two injections of five units of insulin every day," said Christopher.

"My mind zeroes in on the fact that he is sick, he is injured, he needs to get better. That is my first priority, I'm not thinking about other things.

CBC News checked several Vancouver veterinary clinics and found the price of 10 millilitres of Lantus insulin can range widely, from $125 at the West King Edward Animal Clinic to $175 at the Yaletown Pet Hospital.

But Christopher said he has discovered there is an alternative to paying the high prices at vet clinics – buying the drugs himself at a pharmacy.

He got his vet to give him a prescription so he can seek out the best deal on insulin. And as CBC News learned, shopping around can mean a big difference in prices.

CBC News checked seven popular pharmacies and found the same 10 ml of Lantus insulin at prices ranging from $90 to just $63 at the Willingdon Costco in Burnaby.

Christopher notes that is $111 less than the Yaletown Pet Hospital is charging for the same product.

While many people have no idea that they do not have to buy their pet's medicine from their veterinarian, the College of Veterinarians of B.C. confirms, if asked, a veterinarian has to write a prescription if a customer asks for one.

CBC News also looked at how much cat owners could save by buying their own supplies to treat conditions like kidney or renal failure in their pets.

Once cats are diagnosed and stabilized, owners typically have to pay the ongoing costs for medical supplies like hydration tubes, needles and solution to keep them alive.

His vet taught him to hydrate his cat with medical supplies just like a human IV line and a bag of fluid called lactated ringers. Even though Leversage hates needles he manages to give the cat daily treatments using the set-up.

"Once a day, every evening … we administer 250 ml subcutaneously through the skin at the back of his neck," Leversage said.

In the beginning, the supplies were costing him about $20 a kit, which would have added up to about $1,800 a year.

CBC News confirmed veterinary clinics charge about $14 to $33 for the necessary equipment.

But after two months of paying clinic prices, Leversage found an online source called Pacific Health Care Supply that offered the same supplies for $10 a kit.

Pacific Health Care Supply is run by Grant Crawford, who sells human medical supplies out of a warehouse in Surrey, B.C.

Crawford told CBC News he was surprised to hear vets are charging up to $33 for kits similar to the one he sells for $10.

"I wish I could make those kinds of profits! But no, we're pleased to be able to help people and we're charging what we think is a reasonable price," said Grant.

In Leversage's case it cuts his costs in half, and he now spends the cost of a small latte, $2.50 a day, to keep Rupert alive, a cost he considers very worthwhile.

But Leversage cautions cat owners should only source out their own supplies when they know what they are doing, and under the guidance of a vet.

CBC News asked several vets why their prices are so much higher than pharmacies and medical suppliers.

Dr. Yuri Bernstein at the Arbutus West Animal Hospital said their products come with expert advice and support for chronically ill cats, in a business that is very competitive.

For instance, Bernstein said when it comes to the price for 10 millilitres of insulin, the bigger pharmacies that sell more volume are able to charge lower prices.

"We don't stock 10 litres. We stock one bottle and maybe sell a bottle every three months," he told CBC News.

"The reality of it is, when you stock six litres you can sell it cheaper. Costco is a discount seller. We try to be fair to our clients, but there's a reality of trying to make a living."

And while he doesn't like it, Bernstein said he will write a prescription for pet owners, but adds that is not how animal medicine is supposed to work.

"While I can write a prescription, I believe I should also get paid for doing my job as a doctor. Writing a prescription is not the question of just stamping a piece of paper. It's actually the very essence of medicine."

He also points to the cost of his $200,000 operating room, with X-ray equipment, laparoscopic surgery capability, plus his staff and other overhead costs he must cover.

Bernstein said he and many other vets do adjust prices for low-income pet owners, and they do pro bono work. For these reasons, he appreciates it when his clients buy exclusively from his clinic.

No government regulations on prices

Since veterinary medicine is not publicly subsidized like human health care, vets can charge whatever they like for products and services.

There is a fee guide, but the College of Veterinarians of British Columbia has no ability to enforce it and Bernstein said each clinic is able to set its own prices.

"Each hospital is a private business. We don't receive any government funding. It has very, very slim profit margins."

Christopher believes there should be more regulation to protect pet owners.

"Perhaps there is a lack of regulation in terms of making health care for animals affordable," he said.

"A lot of British Columbians are pet owners and it would be nice if there were some stricter regulations in place to ensure that prices were lower."

In the meantime, he recommends finding a compassionate vet.