British Columbia's former provincial health officer says he has "grave concerns" about reduced services for people struggling with drug addiction, while the manager of a supervised consumption site in Toronto says people are feeling abandoned due to the COVID-19 pandemic.

British Columbia's former provincial health officer says he has "grave concerns" about reduced services for people struggling with drug addiction, while the manager of a supervised consumption site in Toronto says people are feeling abandoned due to the COVID-19 pandemic.

Dr. Perry Kendall declared an ongoing public health emergency in B.C. four years ago as the province led the country with a record number of overdose deaths fuelled by the opioid fentanyl.

Services were ramped up through more overdose prevention and supervised consumption sites in B.C., as was distribution of take-home kits of naloxone, a medication used to reverse overdoses.

"We were making steps and strides in addressing stigma and creating access to a continuum of care, from harm reduction to medication assistance or to recovery, if that was your goal," said Kendall, co-interim executive director of the B.C. Centre on Substance Use.

He said widespread job losses and more homelessness due to physical distancing at shelters have created even greater challenges for those battling substance use.

"Hopefully we'll have the courage and the political will and the money to try to address it when we come through the other side of this. There are very, very, very vulnerable people out there and stigma is still raging."

Kendall said recent amendments to the federal Controlled Drugs and Substances Act were a positive move for illicit drug users as doctors can now prescribe a broader range of safer substances, such as stimulants, benzodiazepines and hydromorphone, for those with an addiction to opioids.

However, there aren't enough prescribers despite a B.C. Centre on Substance Use program that has offered online training since 2017 in addiction medicine, he said — nor are there adequate linkages to care.

Rush to set up phone line

The province is trying to increase access to addiction care through a phone line of experts, including doctors, nurses and pharmacists.

"We're working now to set that up as quickly as we can because of this double challenge of the COVID pandemic on top of the opioid overdose epidemic," said Kendall, who recently returned from retirement to serve on a COVID-19 advisory committee to the current provincial health officer.

Jen Ko, program manager of the South Riverdale Community Health Centre in Toronto, said some of the nine overdose prevention and supervised consumption sites in the city have seen their hours cut, including one run by Toronto Public Health after an outbreak of COVID-19 among staff in late March.

"Folks are really isolated, really abandoned," Ko said, adding that drop-in and meal programs have been suspended for the most vulnerable people, who can no longer make their usual social connection with employees wearing personal protective equipment (PPE).

"A lot of the things that people come to the service for are the human services, the connection to the staff, the conversation and support, but being in PPE [means] nobody can tell who is who."

She said in an email the number of booths where drug users inject their own substances has also been reduced to two from six to maintain physical distancing.

There have also been cases of COVID-19 among staff, including those at the site, Shahin said.

Toronto had its highest monthly number of overdose fatalities in a year last month, when 19 people died, she said.

"We want to encourage people not to use drugs alone, have a naloxone kit on hand and use a supervised consumption service if possible," Shahin said.

Dr. Mark Lysyshyn, deputy chief medical health officer for the Vancouver Coastal Health authority, said some overdose prevention sites were temporarily closed due to concerns over physical distancing. But others, including the supervised injection facility Insite, continued operating as essential services that don't require such measures.

Lysyshyn is concerned that visits to the sites have dropped by half in recent weeks.

"Some of this was because we had those temporary closures but it could also be that people are afraid to come to them because they're worried that they will be exposed to COVID. So the alternative is to use drugs alone, which we know is a super-dangerous activity." 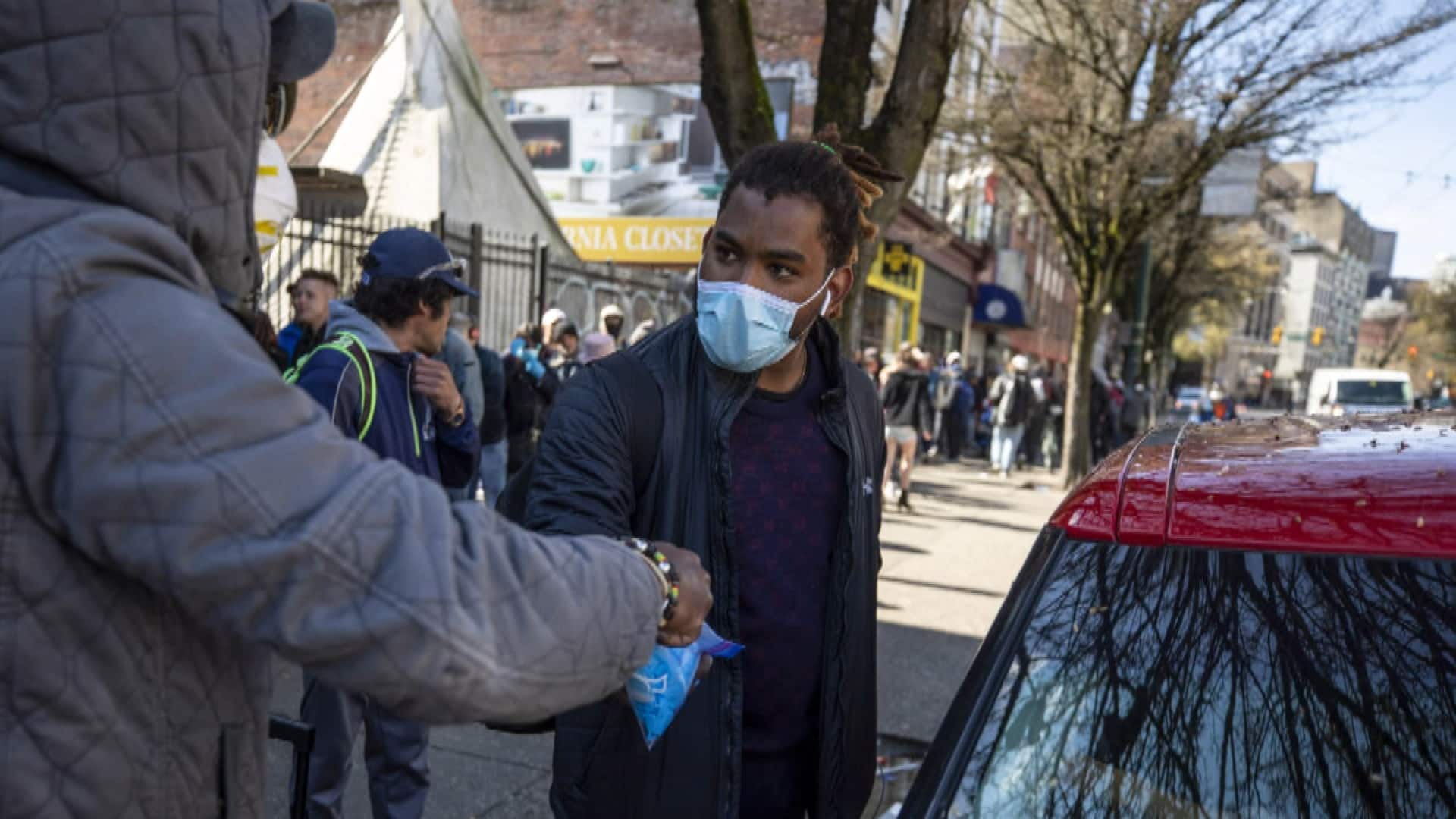 11 months ago
2:11
Anti-poverty advocates in Vancouver fear a COVID-19 outbreak could devastate the already struggling community on the Downtown Eastside, where many are homeless and drug or alcohol addicted. 2:11

Two weeks ago, police in Vancouver responded to eight suspected overdose deaths in a week, the highest number since August after a decline in fatalities over the past year, the city said.

Lysyshyn said access to illicit drugs has been more difficult for users with the Canada-U.S. border closed to non-essential travel, but the new prescribing guidelines have been positive.

"We may see that has helped people and that will move ahead the safe-supply programs that were being proposed before the pandemic," Lysyshyn said.

Kirsten Duncan, a social worker in addiction medicine in acute care at Royal Jubilee Hospital in Victoria, said the resources discharged patients were referred to have mostly shut down, though some have been offering online support.

"These groups that have huge histories with trauma already, let alone the trauma of the fentanyl crisis, I can't imagine what another crisis on top of things will do."