Police have identified the man found dead in the campground at the Pemberton Music Festival as 21-year-old Nick Phongsavath of Regina, Sask. He was found dead inside his tent just after 6 p.m. PT Friday.

Man was found dead in his tent just after 6 p.m. PT Friday 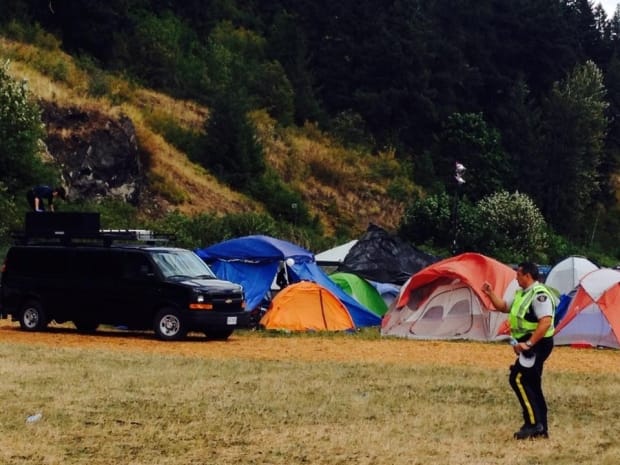 Police have identified the man found dead in the campground at the Pemberton Music Festival as Nick Phongsavath, 21, of Regina, Sask.

Just after 6 p.m. PT, festival-goers found Phongsavath unresponsive inside his tent, which had been set up near a row of portable toilets at the north edge of one of the festival camping areas.

Investigators said Saturday that they had not confirmed the cause of the man's death, or whether foul play was involved.

“IHIT is working closely with the Sea-to-Sky detachment and have been interviewing witnesses and speaking with event attendees throughout the night," said IHIT's Sgt. Jennifer Pound. "At this point, there is nothing to confirm or definitively rule out foul play."

Investigators say an autopsy will have to be done to determine the cause of death.

IHIT initially withheld the deceased's identity as investigators were having trouble locating his next-of-kin. But as news of a suspicious death began to spread panic in the wider community, investigators issued a request through Twitter, asking festival-goers to get in touch with their families to let them know they are OK.

“It is estimated that there are close to 20,000 participants attending this music festival, creating a very dynamic environment for investigators," Pound said. "Whistler/Pemberton RCMP as well as HUKA event organizers have been extremely helpful in assisting IHIT with this investigation.”

Police are asking anyone with any information about Phongsavath's death to call IHIT at 1-877-551-4448.

Anyone with questions about the festival itself are being asked to call HUKA's information line at 1-646-918-5130.

Some of those camping at the festival say the campground has become an eerie place, with police tape surrounding a large space around the row of portable toilets and the tents where Phonsavath's body was found.

Reut Amit, who was camping across from the apparent crime scene, told CBC News a group of festival-goers discovered the man's body, and tried to keep others away until police arrived.

"Our tent is facing the port-a-potties, so we were sitting at our campsite and people were still using the washroom," she said. "It looked like a group of people were sort of blocking off this one port-a-potty and telling people not to go in."

Police later brought in a mobile command centre, and festival security told some of the campers that the area, which is between the Alberta and Saskatchewan camping areas, would remain cordoned-off all weekend.

Festival organizers said 55 campers were kept from accessing their belongings inside the taped-off area.

In a statement released Saturday, HUKA Entertainment said food, water, shelter and clothing were being provided to those people, who should be able to return to their campsites Saturday night.

Show will go on

HUKA Entertainment also expressed sadness about the death, and tried to reassure festival-goers that the campground was a safe place and that the show would go on.

The RCMP are confident that this was an isolated incident and that the festival site is safe and well organized.- Pemberton Music Festival organizer HUKA Entertainment

"We are deeply saddened by the tragic incident that occurred on July 18," the statement read. "Our prayers and deepest condolences go out to Mr. Phongsavath’s friends and family."

"The RCMP are confident that this was an isolated incident and that the festival site is safe and well organized. With the support of the RCMP, we will continue with the Pemberton Music Festival. We hope that the festival community will come together and keep Mr. Phongsavath’s loved ones in their thoughts during this difficult time," the statement said.

"The safety of our attendees is always our primary concern. We have significant security resources on-site including security personnel, RCMP, customer service representatives and a full medical team. We are also providing on-site counseling services for all guests and staff.

"Pemberton Music Festival was created in the spirit of community and friendship. As we move into the fourth day of the festival, we remind everyone to look after their neighbours, report any concerns to security and help continue to make our event a safe and positive experience for everyone."

Inside the festival area we have arrested seven people since Wednesday. These arrests have been related to intoxication in public and causing a disturbance.- Whistler RCMP Sgt. Rob Knapton

The organizers from New Orleans, HUKA Entertainment, said they spent millions on improvements after a previous incarnation by another promoter in 2008 was marred by traffic jams, irritating dust and filthy portable toilets.

Whistler RCMP Sgt. Rob Knapton said traffic to and from the festival has yet not created any significant concern this year.

Knapton also said officers on the festival grounds have not encountered many incidents requiring police intervention.

"Inside the festival area we have arrested seven people since Wednesday," he said. "These arrests have been related to intoxication in public and causing a disturbance."