A man who was on the B.C. Transit bus that struck and killed a cyclist, after she apparently fell off a curb on the Stanley Park causeway on Saturday night, describes the chaotic scene as "utter horror." 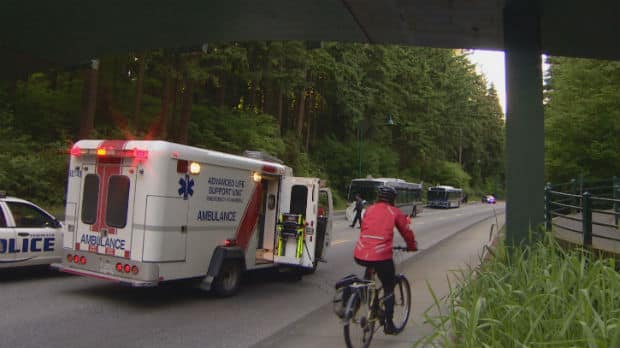 7 years ago
2:24
Concerns about the safety of cyclists on the Stanley Park causeway 2:24

A man who was on the B.C. Transit bus that struck and killed a cyclist, after she apparently fell off a curb on the Stanley Park causeway on Saturday night, described the chaotic scene as "utter horror."

"The bus apparently screeches and there's rubber, we smell rubber, smoke, and we're travelling several hundred metres, and there's a big commotion and everybody is screaming."

Kirkup says he travels on the bus route regularly, and while some drivers tend to speed through the area, the man at the wheel Saturday night was not speeding.

The cyclist, who has not yet been identified, died instantly after she fell off the curb and was hit by the bus shortly before 7 p.m. PT, police said

Vancouver police spokesman Const. Brian Montague says the woman may have hit a pedestrian on the sidewalk before falling into traffic.

"Our investigators have talked to some witnesses. That's the initial belief, that as the cyclist was coming down the sidewalk, she did collide with some pedestrians that were also on the sidewalk, and that's possibly what caused her to fall into traffic," said Montague.

Montague said the sidewalk on the causeway is shared and that cyclists must yield to pedestrians. There is no barricade between the shared path and the road.

The Vancouver Police Department is asking any witnesses who were on the bus to contact them. Police are also reviewing footage from a video camera mounted on the bus.

On Sunday, another cyclist who suffered serious injuries on a shared bike path said the incident on the Stanley Park causeway could have been avoided.

Nine years ago, Jane Lister was cycling on the Burrard Street bridge when she swerved to avoid pedestrians. Lister tumbled into traffic and was crushed by a mini-van.

She thinks the city needs to put in a barricade through the Stanley Park causeway.

"I think we know now that having a sidewalk that doesn't have barricade is a recipe for disaster," she said. "I think this is unfortunate evidence that this is a very serious issue that we need to be addressing."

Lister sued the City of Vancouver over her accident and eventually settled out of court.

But unlike the Burrard Bridge, which falls within Vancouver's city limits, the Lions Gate Bridge and the Stanley Park causeway are under provincial jurisdiction.

A spokesperson for the province said bike safety is an ongoing concern, but any possible changes cannot be discussed until the police investigation into this latest incident is completed.

With files from CBC's Kirk Williams