Amid parking mess in East Vancouver, locals give up on city response

Every day, twice a day, parking chaos explodes on a particular stretch of Franklin Street in East Vancouver. Though residents and businesses have complained to the city several times, they say their concerns have gone nowhere and there's no solution in sight.

Every day, twice a day, parking chaos explodes on a particular stretch of Franklin Street in East Vancouver.

"It's actually dangerous some days. You can't walk on the sidewalk and you're forced into the middle of the road and there's cars going in both directions," said Carmen Buchmann, a local resident who walks by the area on her way to the gym.

Locals in the area say that, during peak times, fights routinely break out, cars are often damaged and traffic is at a standstill in one of the busiest industrial areas of the city.

The primary cause of the problem sits in the middle of the block: a large blue building, home of the B.C. Maritime Employers Association dispatch centre.

There, twice a day, hundreds of longshoremen show up to swipe their cards and get on the list for work on the next 12-hour shift. It's a first come, first served system and not everyone gets assigned a job.

But the parking lot in front of the building only holds space for about 100 cars.

The parking problem occasionally leads to skirmishes, leaving many in the area feeling intimidated by the longshoremen.

And though residents and businesses have complained to the city several times, they say their concerns have gone nowhere and there's no solution in sight.

It's also a problem sustained by a reluctance to digitize and upend years of tradition. 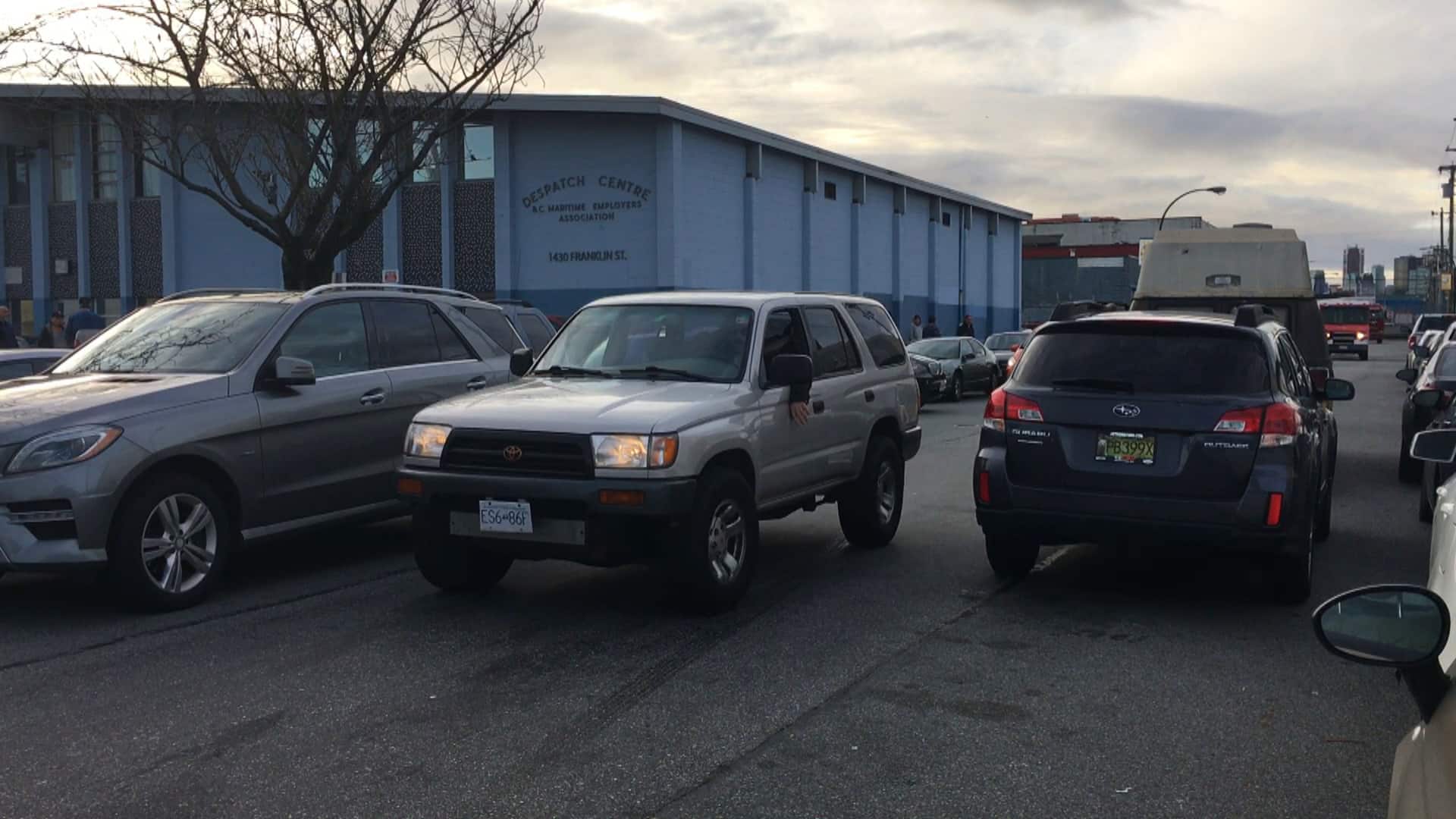 3 years ago
1:00
Cars triple parked on the street make it tricky for traffic to get by on Franklin Street in Vancouver 1:00

After a particularly close call nearly getting hit by a car last summer, Buchmann phoned the city to complain.

"I don't feel like the longshoremen parking in the street should be cause for me to lose my life, or anyone else's for that matter," she said.

But Buchmann discovered the city only sends bylaw officers to the area in pairs or with a police officer for safety — a fact the city confirmed was due to an incident in the late 1980s.

In a written statement, the city said it's aware of the issue and has been working with local businesses and residents towards finding a long-term solution.

Taryn Scollard, the city's director of streets, says the city received 36 complaints in the past year and bylaw officers responded to 25 of them, issuing 20 tickets.

Other businesses blame the worsening situation on a new nearby Canada Post facility built in 2015, which has no parking for its 200 employees.

Others blamed new condo developments in the up-and-coming neighbourhood centred around the Waldorf Hotel.

The sole activity at the dispatch centre is, well, dispatch.

So one logical solution could be to switch to a digitized system that would allow the longshoremen to clock in and check their assignments from the comfort of their homes.

But the longshoremen CBC News spoke to — none of them on the record for fear of provoking the union — said they don't want it.

They say coming to the building in person means they can make sure the lucrative jobs are fairly distributed.

Rob Ashton, president of the International Longshoremen and Warehouse Union Canada, wouldn't share the union's official position on the matter.

But he did say it's a collective bargaining issue, and negotiations are coming up next year.

If the business does digitize its dispatch system, the large blue building in one of Vancouver's hottest neighbourhood could be up for grabs.

But for residents like Carmen Buchmann, trying to get to the gym every other day, the parking problem points to a bigger issue with the city.

"It bothers me that the city seems to be impotent in enforcing its bylaws," she said. "This is our community, we should all have access to the streets."

Editor's note: Due to a misunderstanding, a previous version of this story included the name of someone who spoke to CBC News for background purposes.