The developer behind the six-storey, wood-frame condo project in Richmond, B.C., that was destroyed in a spectacular blaze Tuesday night is vowing to rebuild.

No injuries reported as 1st project of its kind in B.C. goes up in flames 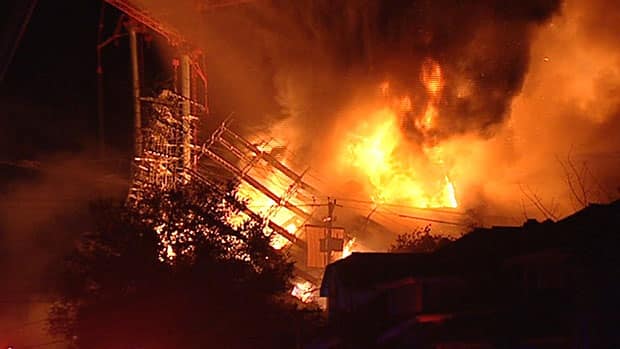 The developer behind the six-storey, wood-frame condo project in Richmond, B.C., that was destroyed in a spectacular blaze Tuesday night is vowing to rebuild.

Dana Westermark, the owner of Oris Development Corporation, said once the fire investigations are complete and insurance is dealt with he intends to clear the debris and get back to construction.

"This is a difficult time not only for us as a developer but for the buyers and partners who have been involved with us throughout the process," said Westermark in a statement released Wednesday morning.

"We ask for everyone’s patience and vow that we will move ahead and deliver on our promise to bring a new, vibrant community to Richmond Centre," he said.

The fire broke out around 9:30 p.m. PT at the Remy construction site near the intersection of Cambie and Stolberg roads in the city just south of Vancouver, lighting up the night sky.

Two buildings, which contained a total of 188 units of condominium and social housing, burned out of control for five hours before firefighters quelled the blaze.

"When I arrived, it was quite shocking," CBC videographer Chris Anaka said from the scene. "A huge fire right in the middle of a residential neighbourhood."

No injuries were reported, but more than 40 firefighters from Richmond and Vancouver spent the night battling the three-alarm fire.

Flames lit up the night sky for kilometres around and hundreds of resident turned out to watch. But firefighters were unable to put the fire out before the building was destroyed.

"It is an all-wood structure, and it's also a building that's under construction, and as such, it doesn't have all of its safety features within it yet," said Wilkinson.

There were some problems with spot fires as burning embers fell down on the roofs of surrounding homes, and one empty house was also destroyed.

The other homes were evacuated, but people were soon allowed to return, after firefighters had the fire under control, Anaka said.

By daybreak, firefighters were still putting out hot spots in the structure, which had collapsed on itself. All that remained standing was a large wooden elevator shaft that was blackened by the flames.

Wilkinson said it was too soon to say what might have caused the fire. "We don't have any indications at this point. As you can imagine, the fire is very hot, and we're just in the very early, preliminary stages of investigation," he said.

But a man who identified himself to Richmond RCMP as the project supervisor said there had been a number of threats made against the project.

The Remy housing project was the first of its kind built in B.C. under new rules allowing six-storey wood-frame buildings, and included a new city-operated geothermal system.

Even before construction started last year, Richmond's fire department warned its ladders weren't high enough to reach the top of the structure. But Wilkinson said its height was not a concern in this instance because the building was not inhabited.

City of Richmond spokesman Ted Townsend said the fire was a big blow to the community.

Construction at the two buildings was scheduled to be completed this summer.

Another building on the site housing a daycare, which had not yet opened, was not damaged by the fire. Construction on a fourth building planned for the site had not yet begun.