A pod of killer whales has paid a surprise visit to Vancouver's Burrard Inlet, passing under the Lions Gate Bridge and touring the busy harbour Wednesday morning. 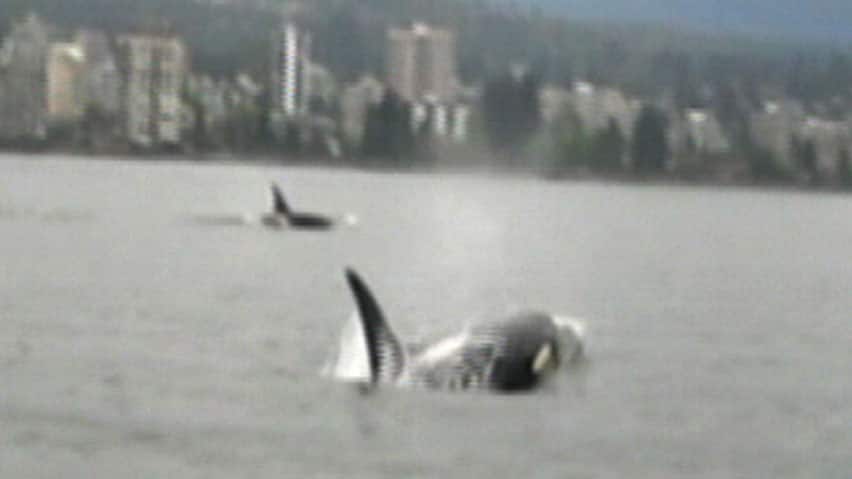 10 years ago
2:12
When orcas were spotted in Vancouver's English Bay, aquarium researchers were quick to take to the water, the CBC's Aarti Pole reports 2:12

A pod of killer whales has paid a surprise visit to Vancouver's Burrard Inlet, passing under the Lions Gate Bridge and touring the busy harbour Wednesday morning.

"They were just swimming most of the time, but it looked like there was a few boats out there as well, and it looked like they were kind of playing and jumping up and slapping their tails a few times," said Ryan Tyndall, a city crew member working on the Stanley Park Seawall by the inlet.

"And sometimes they would go missing for a while and then a few minutes would go by and they would come back up," said Tyndall, who shot cellphone video of the ten-member pod.

Jason Assonitis, of Bon Covy Fishing Charters, was leaving the inlet to take a group out fishing when he saw the orcas.

"It was pretty shockng, these big fins came up," Assonitis said. "It's something you rarely see — especially five minutes from downtown Vancouver."

The sighting was posted in a message on the Parks Board twitter account just before 9 a.m. Wednesday.

A second tweet reported the whales had gotten as far as Brockton Point on the north side of Stanley Park before encountering boat traffic and turning around and heading back west to the open waters of English Bay.

Burrard Inlet is located between downtown Vancouver and the North Shore. The busy waterway contains several large port facilities that are part of the Port of Vancouver.

A fishing guide at Bonnie Lee charters, based out of Granville Island, said orcas are sometimes spotted in the open waters of English Bay west of Stanley Park and just to the south of the city at the mouth of the Fraser River.

Last year in May a grey whale swam into Vancouver's False Creek  and stayed for a number of days in the area before departing.