For more than a week, a whale known as J-35 has been holding up its deceased calf, a process that requires tremendous energy from the mother. Orca observers have seen this behaviour before — but not for this long — and that has some scientists worried.

'It really pulls at your heartstrings when you see that,' says marine mammal co-ordinator

As Taylor Shedd climbs into a blue zodiac and pulls out from the shore of San Juan Island in Washington State, he is preparing for another long day of keeping watch on a distraught whale that is refusing to let go of its dead calf.

The calf was born on July 24, but died shortly after it was born. Since then, the orca known as J-35 has been seen arching its back in order to push its dead offspring along the surface of the water with its forehead, or carrying the calf by clutching its tail in its mouth.

J-35 is one of 75 endangered southern resident whales that criss-cross the straits and sounds around the San Juan Islands and Canada's Gulf islands.

For the past week, Shedd has spent up to 12 hours a day peering through binoculars and into his camera trying to confirm if the orca is still carrying its deceased offspring. It's not until he downloads his photographs every night that situation sinks in for Shedd, who worked on whale watching boats as a teen before studying marine biology at university.

"That's when it really hits," says Shedd. "Man, she is still carrying it. She still has this stress and this pain that she must be going through."

Shedd is with Soundwatch, an organization created by a whale museum in Washington state. It monitors the sea around the San Juan Islands and educates boaters about the need to protect marine life.

He, along with members from the B.C.-based organization Straitwatch, have been part of an effort to monitor the distraught orca while it goes through a process that scientists still don't fully understand.

Shedd has observed whales exhibiting this type of behaviour before, but he's never heard of an orca carrying a dead calf for more than a day or two. The eight days that's been documented in this case is unprecedented, he says.

"It really pulls at your heartstrings when you see that," says Paul Cottrell, the marine mammal co-ordinator for Fisheries and Oceans Canada. He spent four days on the water in a government of Canada boat helping keep marine traffic away from the orca.

"It's probably more difficult for her to forage while she is doing all this as well, so we are concerned about her body condition going forward."

One observer said J-35 appears to have some help — though not from humans.

Jenny Atkinson, who serves as director of the Whale Museum on San Juan Island, told As It Happens guest host Piya Chattopadhyay that pod members seem to be sharing J-35's burden.

"While we don't have photos of the other whales carrying it, because we've seen her so many times without the calf, we know that somebody else has it," Atkinson told the CBC Radio show.

A drone was deployed this week in an effort to survey the mammals from above and take measurements to help determine their health.

5 years ago
Duration 1:10
Drone video from the Center for Whale Research and the University of Exeter taken off Pile Point, on the west side of San Juan Island.​

Cottrell is hoping to be able to retrieve the calf's body, once the mother has finally let it go. If that goes ahead, a necropsy will be conducted to determine just how the calf died.

But for now, the main job is keeping J-35 safe while she goes through a process that some studies have suggested is akin to mourning.

Earlier this month, new rules came into effect in Canada which are similar to regulations that were already in place in the U.S. The Canadian rules require whale-watching vessels to stay at least 200 metres back from the endangered southern resident killer whales. But for now, operators have decided to stay 400 metres away from this group of whales because of J-35.

Listen to J-35 and the pod in recordings captured by The Whale Museum in Washington. 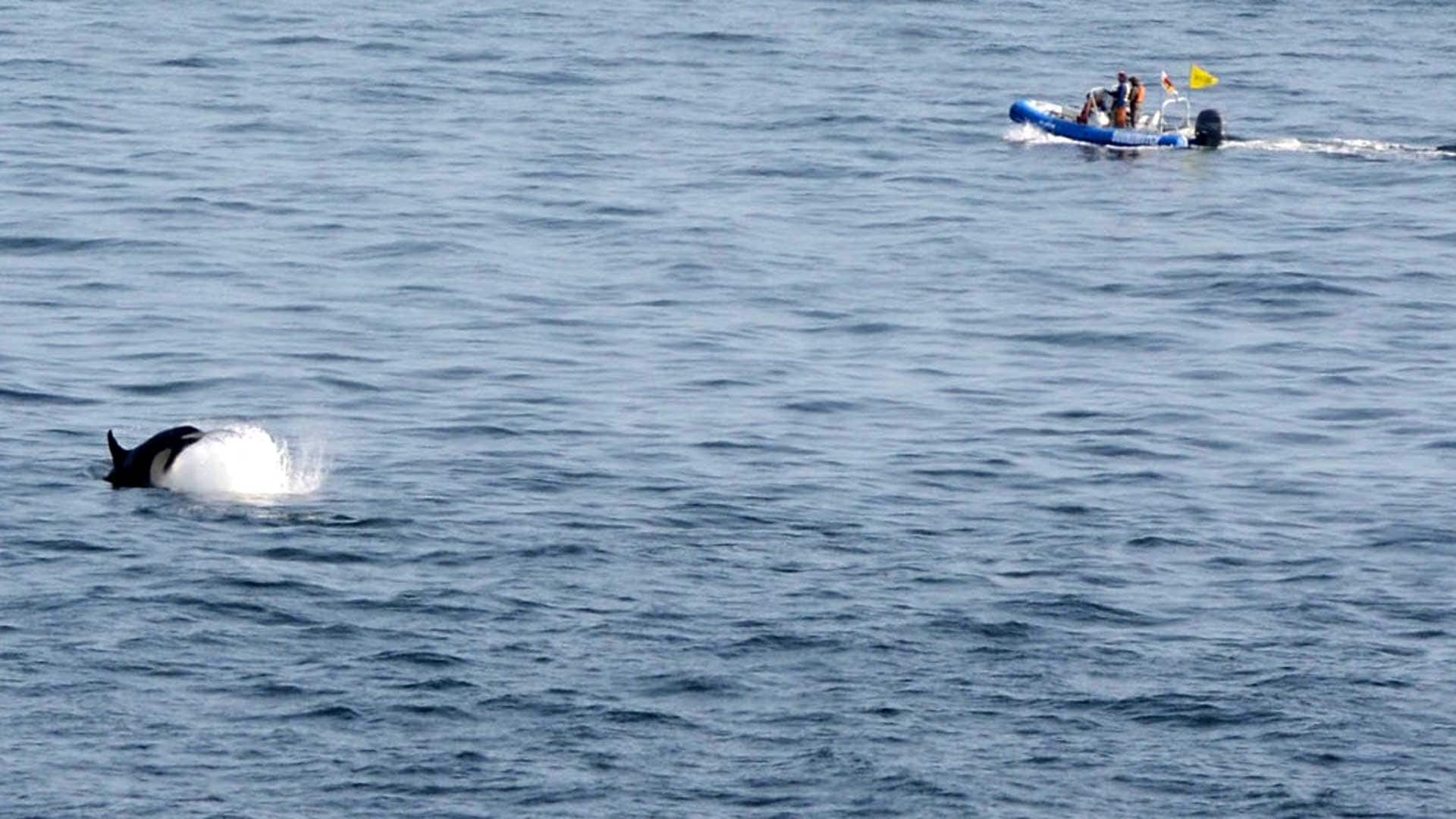 CBC News1:00Hear recordings of J-35 and her pod
The Whale Museum captured these sounds with a hydrophone at Lime Kiln Point State Park.

As time passes the dead calf's body — which could weigh upwards of 200 kilograms — is gradually becoming more buoyant. But for the time being, it's still sinking. Each time J-35 lets go of its offspring, the whale has to dive down and push it back up to the surface, an act that scientists say requires a tremendous amount of energy.

During the past week, Shedd says there have been times when J-35 has trailed more than a kilometre behind the rest of the pod, which is made up of 23 whales. The pod, or smaller groups called matrilines, frequently travel together as the whales moves around in search of food.

"We can't really do anything directly to help this whale, Shedd says. "We can't help her carry the calf. We can't just go over and feed her a salmon."

They plan to continue to track and monitor the mother daily for as long as it keeps carrying the calf. He and the rest of his organization have been bombarded by interest from media outlets around the world, and they hope that if anything, the plight of J-35 shines a light on the entire pod of critically endangered orcas and the need to protect them.