The mood at Oppenheimer Park grew tense in the late afternoon as Vancouver police arrested five people who appeared to be resisting the dismantling of the tent city.

Deadline for camp to be taken down was 10 p.m. PT Wednesday night 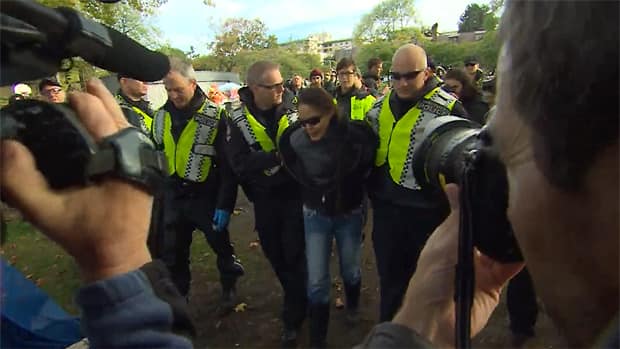 The mood at Oppenheimer Park grew tense in the late afternoon as Vancouver police arrested five people who appeared to be resisting the dismantling of the tent city.

Supporters watched from a distance, beating drums and singing as police moved the people out of the park. Some of those watching yelled out words of protest.

VPD Const. Brian Montague said that three men and two women were taken to jail and that police would be considering recommending charges of obstruction and breach of a court injunction.

Montague said police arrived at 10 a.m. Thursday morning to assist in the enforcement of a court order, and communicated that failure to comply by packing up and leaving the park could result in arrest.

The vast majority of campers were cooperative and moved out to allow city workers in to start cleaning up. But not everyone complied, Montague said.

"A small number of campers who appeared intent on remaining in the park interfered with workers as they attempted to remove the last of the tents. Negotiations throughout the day continued with no progress. Officers were eventually required to step in to keep the peace and forced to arrest five people," he said is a written statement.

Tenters at the Downtown Eastside park had until 10 p.m. Wednesday to leave, after the B.C. Supreme Court granted the City of Vancouver an injunction last week.

The city said over 100 people had already moved to shelters and housing units ahead of the deadline, including about 20 on Wednesday.

As the deadline came and went Wednesday night, the remaining campers and protesters gathered together to sing. When a couple of police officers did stroll through the camp, they were heckled by the campers. But the mood was mostly positive.

As Thursday dawned, about 100 tents remained. Tenters were up early this morning discussing their options, with many starting to pack up their belongings.

On Thursday morning, the City of Vancouver supplied bins to the remaining homeless campers in the park to give them a place to store all their belongings before relocating those who accepted the offer into city-supplied shelter beds.

As of noon Thursday, only a handful of tents were left standing.

Some of the campers told reporters they would not be taking down their tents because they had nowhere else to go.

Even though the camp eventually had to come down, Pivot Legal Society spokeswoman DJ Larkin says she believes the campers changed the dialogue on homelessness.

With files from the CBC's Richard Zussman and Renee Filippone