A standoff is brewing between the City of Vancouver and a group of protesters camped out in a Downtown Eastside park — but in a twist of events, the city itself has been handed an eviction notice.

City of Vancouver says Oppenheimer Park is a backyard for the neighbourhood, not a campground 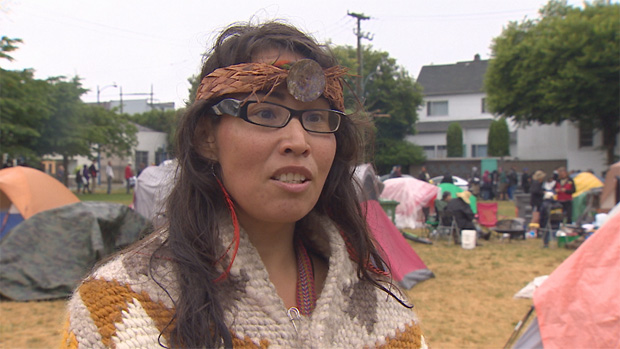 8 years ago
Duration 2:11
First Nation supporters of a homeless camp at Oppenheimer Park say the city can't evict them

A standoff is brewing between the City of Vancouver and a group of protesters camped out in a Downtown Eastside park — but in a twist, the city itself has been handed an eviction notice.

On Sunday, just over a dozen tents stood at Oppenheimer Park. Those living in them tell CBC News they're homeless with nowhere else to live.

In the past three days, the campers have received two eviction notices from the city, which has bylaws prohibiting sleeping in parks and erecting structures on public property.

A 65-year-old man known as JT told CBC News he had a rude awakening Saturday morning as he slept in his tent.

"I could hear some rustling and some 'wake up,' you know, sarcastic laughable tone and, uh, 'Here, we want to give you this,'" he told CBC News.

The homeless pensioner was then handed an eviction notice from the city, telling him he had to leave within 24 hours.

But the deadline to leave, 7 a.m. Sunday, came and went without the city taking any action to remove the tents.

Now, some members of a local First Nation have stepped forward to challenge the city's right to issue the eviction orders — and issued an eviction notice of their own.

Audrey Siegl, of the Musqueam Nation, says her people couldn't stand by and do nothing while the homeless campers, many of whom are native, were kicked out.

"They were going to load up their few possessions that they have and take it to the dump and, the people would be forced out of here or arrested," she told CBC News.

So volunteers moved in, erecting a protest camp alongside the homeless camp that includes a tipi and a longhouse made of evergreen branches.

"Before this was the City of Vancouver, this was​ Musqueam land. It still is," Siegl said.

Siegl says as long as the land's title remains unceded, the homeless and the First Nations protesters have a right to occupy it and the city needs to treat them with respect.

"They're not welcome here with the way that they're doing their business right now," Siegl said.

In a statement sent by email Sunday, the city acknowledges that a disproportionate number of homeless people in the Downtown Eastside are also members of First Nations. It also said it has been discussing housing issues with the region's three host nations – the Musqueam, Tseil-Waututh and Squamish.

The city also re-iterated that camping and built structures are not allowed in city parks as they are safety concerns and create barriers for other city residents who wish to use the green space.

"Oppenheimer Park is the backyard of people in the Downtown Eastside, a popular gathering place for play and relaxation," the statement said. "We need to keep it open for everyone."

Statement from the City of Vancouver

Oppenheimer Park is the backyard of people in the downtown eastside, a popular gathering place for play and relaxation. We need to keep it open for everyone.

We have given notice to people camping in Oppenheimer Park to remove their tents and other structures.  Camping is not allowed and neither is creating structures in parks because these create barriers for other residents who want to use and enjoy the park space and can also cause safety concerns.

We can help people pack up and re-locate their belongings if they need help.

We are aware that a number of people who are camping in the Park are homeless and we are working closely with BC Housing to open temporary shelter for those who are homeless at Evelyn Saller Centre, 320 Alexander St. Hot showers, food and laundry will be available.

The City has clearly documented and is very concerned about the disproportionate numbers of First Nations peoples who are homeless in the city. Council has worked on significantly enhancing the City’s relationship with the three host First Nations – the Musqueam, Tseil-Waututh, and the Squamish Nations – whose Councils meet with Vancouver City Council regularly and together discuss critical public policy issues including the issue of housing for First Nations.

We also know that amongst the group at Oppenheimer the majority of individuals are housed but have issues with the SRO’s they are living in.  These issues are real and the Downtown Eastside Plan recently approved by Council has a major focus on refurbishing or replacing the SROs as well as keeping the units affordable to our low income residents. This will take time but the City is working hard with other partners on this issue.

In the meantime the City is working with BC Housing to find housing or ongoing shelter for those who have been identified as street homeless.

This activity has been laid out in the report to Council last week which focused on a number of actions which are required for us to end street homelessness in the near term. The key actions include:

In the meantime the City supports the right to gather and carry out peaceful protest however, our Parks are there for the enjoyment of everyone and we are requesting that the structures be removed from Oppenheimer Park.

With files from the CBC's Belle Puri