Only in Vancouver? Marijuana oil-infused pizza on the menu 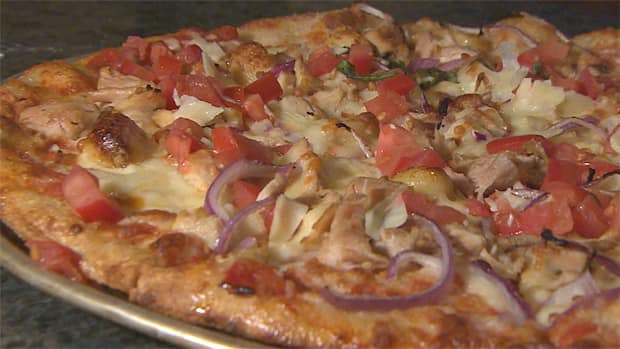 A Vancouver pizzeria is serving up slices with an extra special ingredient — if you're over 18 and have been prescribed marijuana by a doctor.

Anthony Risling explains that at Mega iLL, on Kingsway at Fraser, you can ask the kitchen to add their special ingredient for an extra $10.

"Basically we infuse it through an oil extraction process, where we drizzle the oil onto the pizza and it medicates you when you eat it. It's a little different effect from smoking it. It takes maybe about a half hour for it to activate."

One customer at Mega iLL told CBC News the added oil has "a little bit of a tangy flavour" but otherwise doesn't have much of a taste on the pizza.

Risling is fairly certain that no one else is Canada is operating a pot-zzeria. He said the idea came from a trip to Cambodia, where a pizzeria called Happy Pizza used a similar process to add THC to the pies.

But the future of Mega iLL's signature product is in limbo, with hew Health Canda rules on medicinal marijuana coming into effect on April 1.

A last-minute federal court injunction is keeping some of the new rules from coming fully into effect, but the final outcome of the case could take the pizza off the menu.

"We'll still be open regardless. We just might not be able to infuse the pizzas anymore," Risling said. "But we will still be open as a pizza place where people can come and medicate here."