Memories of carrying the 2010 Olympic flame still burn brightly for these 4 B.C. torchbearers

When Erin Boisvert showed up for work at her elementary school in Whistler on Feb. 5, 2010, it was just supposed to be another day. Little did she know that later that day she would be an Olympic torchbearer, one of 12,000 chosen for the 2010 Winter Games torch relay.

'It was just such a sense of pride and joy and feeling the energy of our country,' says Rick Hansen

When Erin Boisvert showed up for work at her elementary school in Whistler, B.C., on Feb. 5, 2010, it was supposed to be just another day.

Little did she know that later that day she would be running as a torchbearer in the 2010 Winter Olympics torch relay.

It was close to the end of her workday when an official from the torch relay team showed up.

"They were down someone," Boisvert recalls. "Within hours, I was dressed, had the torch in my hand and was running down Bayshores [a neighbourhood in Whistler]."

She was one of 12,000 torchbearers for the 2010 Winter Olympics torch relay 10 years ago. CBC News spoke with four of those people who carried the flame about what that experience meant to them.

The torch was lit several months before Boisvert carried it. The Olympic flame was ignited using a mirror and the sun's rays at a ceremony in Olympia, greece — where the ancient Olympics were held — on Oct. 22, 2009.

Boisvert says it was the moment of a lifetime.

"I had no time to think about it. I called my husband, crying through the phone. I was just so excited and I felt so grateful that I was able to be a part of the relay," she says.

Two days later, Boisvert's triumphant smile as she ran her leg of the relay was featured on the front page of The Province newspaper.

It wasn't until family called to congratulate her that she realized she was even featured on the paper.

Erin Boisvert describes how she felt at the moment her front page photo was captured: 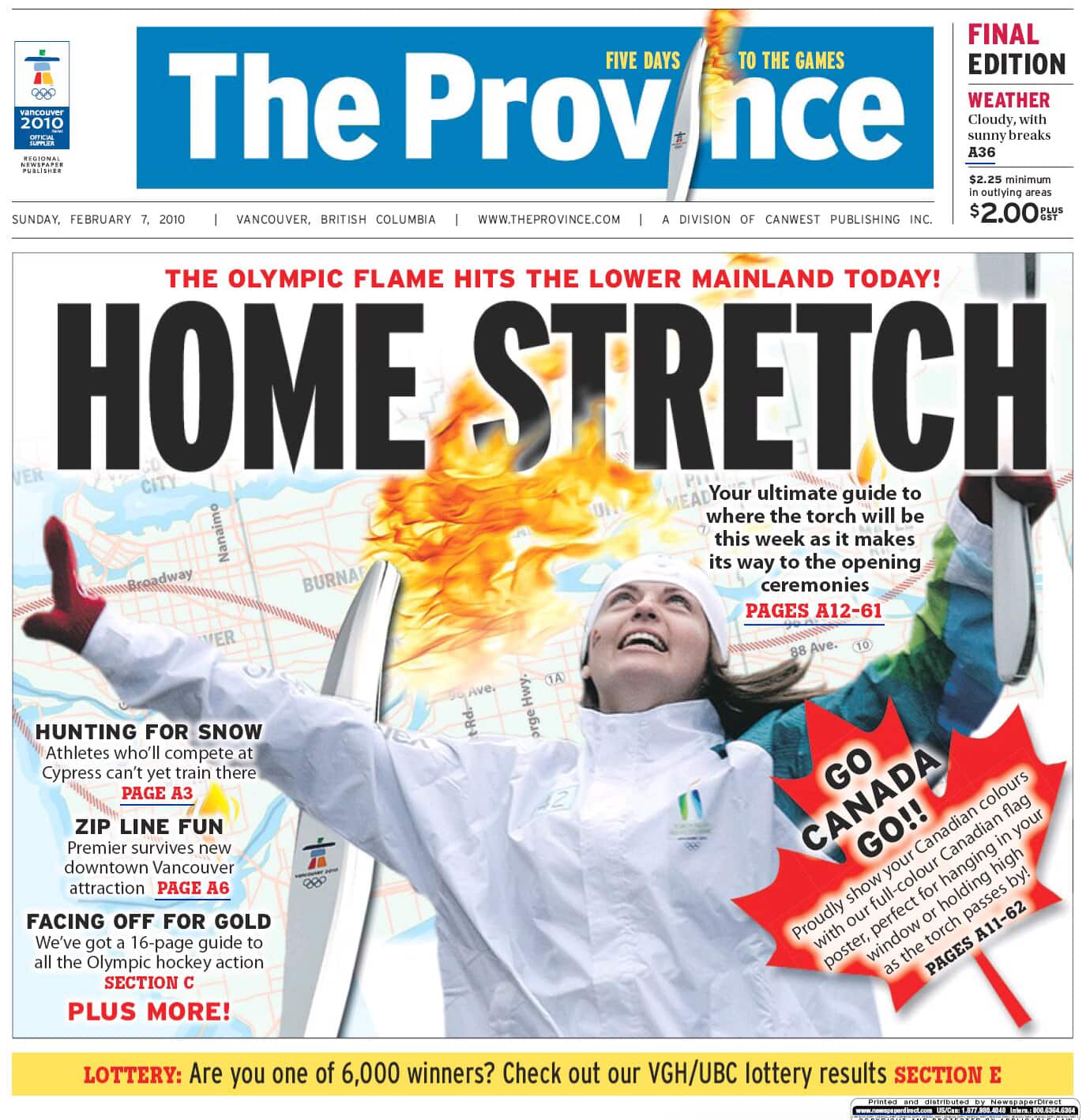 11 months agoVideo
0:44
Erin Boisvert reflects on her contribution to the 2010 Winter Olympics in Vancouver as a torchbearer. 0:44

To pile surprise on surprise, a few days later Boisvert found out she was pregnant.

Boisvert, who is now a principal in Squamish, B.C., says she always tells her son that he ran the torch relay with her.

Also among the thousands of torchbearers was Daniel Martin, 17, from the Tsleil-Waututh First Nation.

Martin, who has a rare genetic disorder, covered his stretch of the torch relay by wheelchair and passed the flame to the late Tsleil-Waututh Chief Leonard George at the entrance to Cates Park in North Vancouver, B.C.

"I know the excitement was there because we allowed him to go school afterwards in his [torchbearer] tracksuit and he just thrives on attention," says Daniel's mother Liana Martin with a laugh.

Proudly displayed on a shelf in the Martin family home are Daniel's torch, uniform and gloves from that day.

As the torch made its way to Vancouver for the opening ceremony, it was also carried by Canadian athletes and Olympians like Joy Fera, a Canadian rower who competed at the 1976 Olympics in Montreal.

Fera says it was a moment she will cherish forever.

"Just knowing the historical, once-in-a-lifetime opportunity… I was very grateful," she says about carrying the flame through a stretch of Coquitlam, B.C.

Fera, who lives in Tsawwassen, remembers with a laugh how her husband was stopped by security as he tried to cross a barrier to give her a hug just as she completed her route.

Her torch is now displayed for all to see at the municipal hall in Delta, B.C.

As was the case almost everywhere the torch went, people lined the streets to see it.

But initially that community support wasn't a guarantee, says John Furlong, head of the organizing committee for the 2010 Games.

He says, at first, there was some negativity over how the Olympics would affect the city.

But as the flame drew closer and closer to Vancouver, something changed and the community's excitement became palpable.

"The way the public took to the streets and joined right in... it just added a momentum to the whole thing that was so special," Furlong remembers.

In the final days of the relay, there was growing speculation about the identity of the final torchbearer, who would light the Olympic cauldron at BC Place Stadium.

In the end, five were chosen, including Rick Hansen, the Paralympian who crossed the globe in his wheelchair in the 26-month Man in Motion world tour from 1985 to 1987 to raise funds for spinal cord research.

Hansen carried the flame into BC Place on Feb. 12, 2010, as part of the opening ceremony for the Vancouver Games.

"It was just such a sense of pride and joy and feeling the energy of our country," he says.

Rick Hansen relives the excitement of the 2010 Winter Olympics in Vancouver: 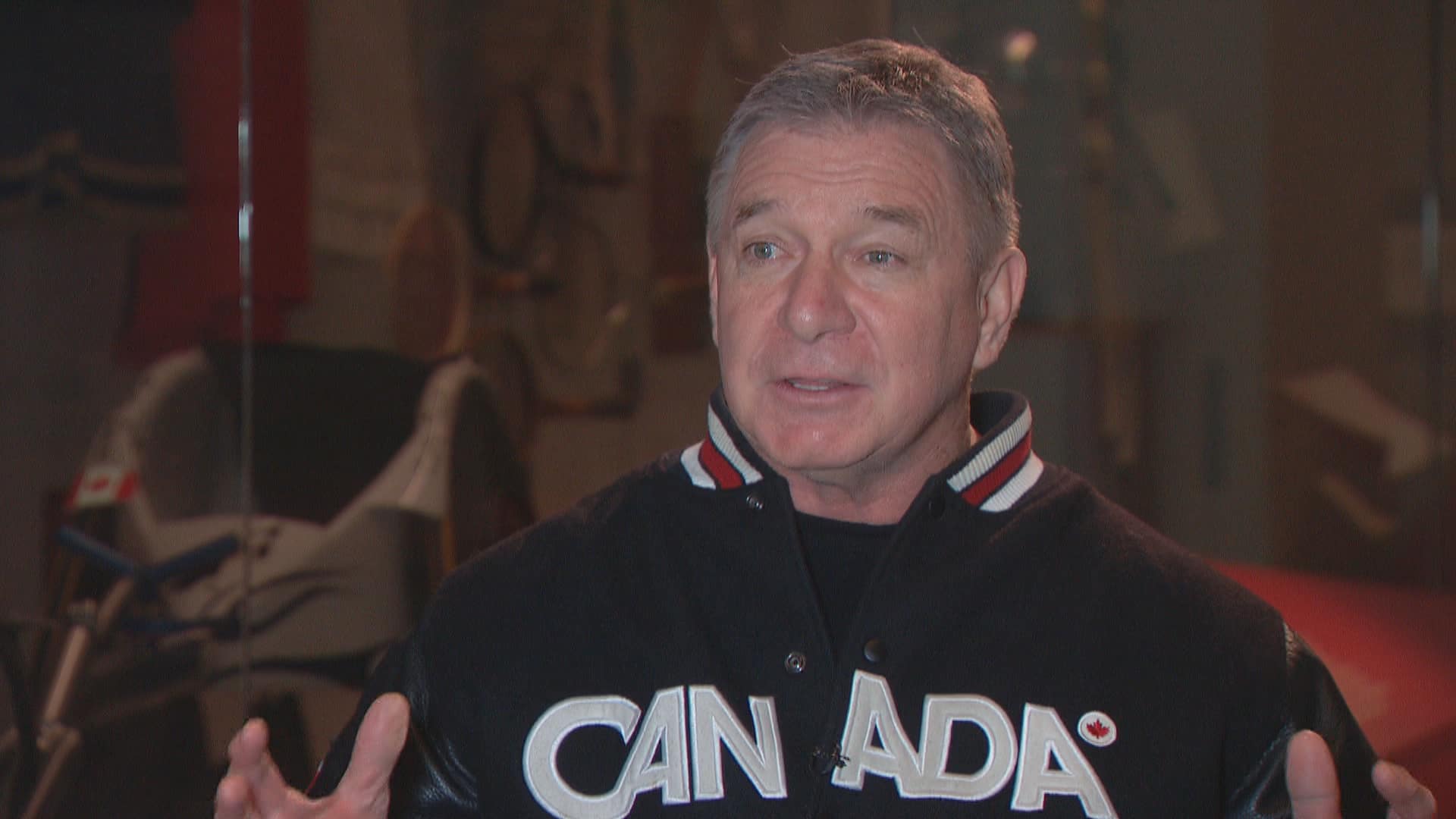 Rick Hansen reflects on his involvement in the 2010 Winter Olympics in Vancouver.

11 months agoVideo
1:00
Rick Hansen was one of five people chosen as the final torchbearers for the Vancouver Winter Olympic games in 2010. 1:00

Gretzky later rode in the back of a pick-up truck to Jack Poole Plaza, where he lit the outdoor cauldron.

Still functioning 10 years later, that cauldron is fired up on special occasions — like the 10th anniversary of the Vancouver Olympic Winter Games.