A suspect has been charged following the stabbing of a woman and police officer outside Immaculate Conception Elementary School in Delta on Wednesday.

Off-duty officer's condition upgraded to stable, woman is listed as serious but improving

A suspect has been charged following the stabbing of a woman and police officer outside Immaculate Conception Elementary School in Delta on Wednesday.

Delta police say, shortly after 3 p.m., off-duty Delta police officer, Acting Sgt. John Jasmins was waiting to pick up his children outside the North Delta elementary school when he witnessed a fight between a nearby man and woman.

According to Delta police Chief Neil Dubord, as the fight escalated, Jasmins decided to intervene. He left his car and tackled the man.

In the process, Jasmins and the woman were each stabbed several times.

Dubord said an officer was on scene one minute later and the suspect arrested two minutes after that and taken into custody. Jasmins and the woman, now identified as a 41-year-old Delta resident, were taken to hospital in serious condition.

"I want to acknowledge our officer's quick thinking and bravery, said Dubord." "Investigators believe that if John hadn't acted so quickly, the woman involved in this incident could have lost her life. He is a hero."

The condition of Jasmins has been upgraded to stable, while the woman's state is still listed as serious but improving.

"I was very surprised that certainly he's very alert and was answering emails and texts here today, so very upbeat and anxious to get out of the hospital," Dubord said of Jasmins.

Jasmins issued a statement Thursday thanking bystanders for their help.

"I want to thank the staff at Immaculate Conception and the parents at the school who leapt in to help immediately, calling 911, providing the initial first aid to the woman who was injured and making sure the kids were looked after," said Jasmins.

"My family and I are doing much better today. We want to also thank our broader law enforcement family and the public for all their support and well-wishes."

While students were under a brief lockdown at the school during the aftermath of the stabbing, police say no children were harmed in the incident.

Classes were cancelled Thursday for students of Immaculate Conception.

"We decided that last night to make sure children were with their families, and that we could gather the staff today to meet, debrief and get some advice in preparation for the school returning tomorrow," said Immaculate Conception Elementary School principal Maurice Jacob.

Delta police Victim Services was there assisting staff Thursday, and will also be on hand Friday to provide comfort and support to school children as they return to classes.

Watch Delta police Acting Sgt. John Jasmins in a 2016 CBC documentary working out to stay in shape, because, due to the nature of his work, "he could be in a fight or confrontation." 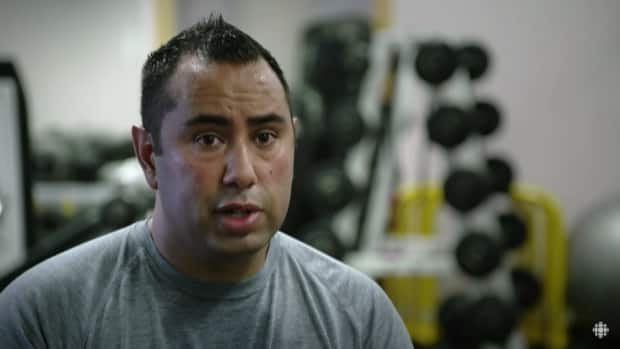 The suspect in the investigation, 49-year-old Manoj George of Delta, is charged with two counts of aggravated assault and two counts of assault with a weapon.

Police say more charges may be forthcoming as the Crown is continuing its investigation.

Dubord says Manoj was married to the woman who was injured in the attack, but their relationship was dissolving.

He says she was at the school to pick up her child.

Manoj has no prior criminal record.

Delta police are asking witnesses of the stabbing who haven't spoken with them to call their non-emergency line at 604-946-4411.