'This industry is not for the weak': Working underwater as a commercial diver

It’s one of the most dangerous jobs in the world, but there’s no other career Dewald Venter would rather pursue.

It's one of the most dangerous jobs in the world, but there's no other career Dewald Venter would rather pursue.

Venter, 31, has been working as a B.C.-based commercial diver since 2014. During that time, he has travelled the world and welded infrastructure underwater.

"Even if I won the lottery, I'd still be doing this," Venter said from his home in North Vancouver.

"This industry is not for the weak. Even if you do manage to pass the training, the industry will sort you out really, really fast," he said.

Venter was born in South Africa, where his father introduced him to scuba diving at a young age. He quickly took to it.

"It's a completely different world down there. It's like you're walking on the moon," he said. "I personally find it very therapeutic. I can't wait to get in the water and just block out reality."

When Venter was 20, he moved to Canada. He settled in Kelowna, B.C., where he eventually studied at the Commercial Diving Institute of Canada.

Venter says the training was gruelling — and expensive. According to the diving institute, basic training to get into the industry costs about $25,000 in tuition and equipment for the 21-week course.

Costs for additional certifications run between a few hundred and a few thousand dollars. But that investment means Venter can take on all kinds of jobs all over the world.

Here's a video showing some of the recent jobs he's done: 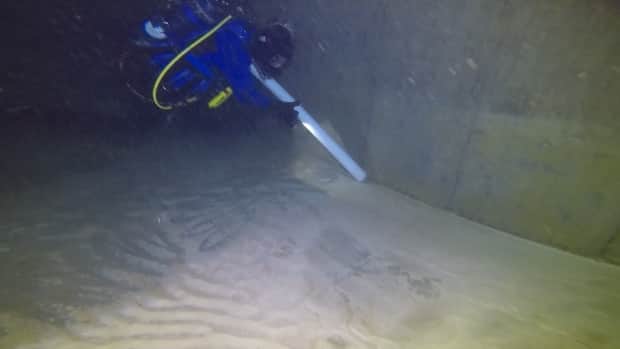 Plunge underwater with a commercial diver

Divers with Venter's level of experience and training typically make about $300 per day, and around $50,000 per year, according to industry experts.

'A little bubble and boom, you're gone'

Venter does many tasks as part of his job, including inspecting equipment and infrastructure offshore.

Some of his work also includes underwater welding. The equipment shoots electricity to melt metal at temperatures up to 5,500 C.

"It melts steel like butter. You can melt steel in a matter of seconds," Venter said.

Underwater welders either work directly in the water or sometimes use a hyperbaric chamber to create a dry habitat. Either way, one of their biggest safety concerns are the gases that are released — including hydrogen, which is highly combustible.

"They say a bubble as big as your fist is enough to kill you. It just takes a little bubble and boom, you're gone," Venter said.

Other hazards include getting the bends, a potentially deadly illness that occurs when the nitrogen from divers' air tanks builds in their bodies and bloodstream and can bubble up inside them as they rise to the surface and reach normal pressure.

Despite the risks, there's no other job Venter would rather do. Mostly Venter enjoys pursuing his passion for diving and being in the water, and the challenges that come with his job.