An environmental group is hoping to trigger a provincewide referendum on the Enbridge Northern Gateway Pipeline, after residents of Kitimat voted 60 per cent against the proposed project this weekend. 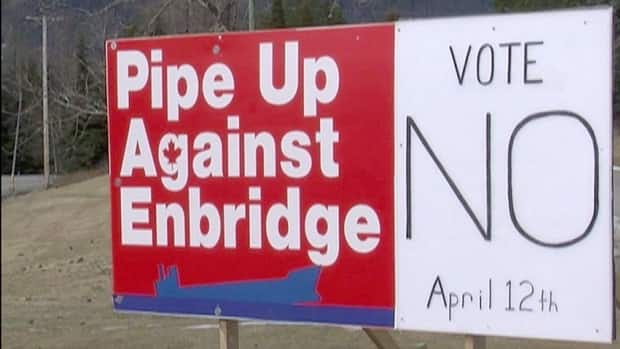 An environmental group is hoping to trigger a provincewide referendum on the Enbridge Northern Gateway Pipeline, after residents of Kitimat voted 60 per cent against the proposed project this weekend

Although the Kitimat plebsicite was non-binding, the results match how most British Columbian's feel about the 1,100 kilometre pipeline proposal, according to Tracey Maynard, a spokesperson for the Dogwood Initiative.

"What happened in Kitimat is exactly how British Columbians feel about the project," says Maynard.

"Polling repeatedly shows that two in three British Columbians feel very uncomfortable with this project and they want to have their voices heard,"

The Dogwood Initative is aiming to trigger a provincial referendum with a citizen's initiative, using the same legislation that was used for the petition and referendum that ended the unpopular HST.

"We need to get 10 per cent of all ridings in B.C. — all 85 ridings — to say they'd like to vote on this project. That goes to the provincial government, who basically decides if they want to put it to a vote in [the legislature] or give it to a vote to the people," says Maynard.

"It's really no surprise to us that Kitimat said 'No' and I believe that British Columbians would say 'No' if put to a vote."

B.C. Premier Christy Clark has already laid out her own conditions for provincial approval of the project, with a list of five critieria she says it must meet.

But for now future of the Northern Gateway project remains in the hands of the federal government, which has jurisdiction over the project.

After a federal review panel approved the project in December, the federal cabinet is expected decide in June on whether the pipeline will be approved.