Northern Gateway opponents to push for referendum if pipeline OK'd

A coalition of First Nations, environmentalists and lawyers have delivered a final rejection of the proposed Enbridge Northern Gateway pipeline, promising a collective campaign to defeat the project should it receive federal government approval. 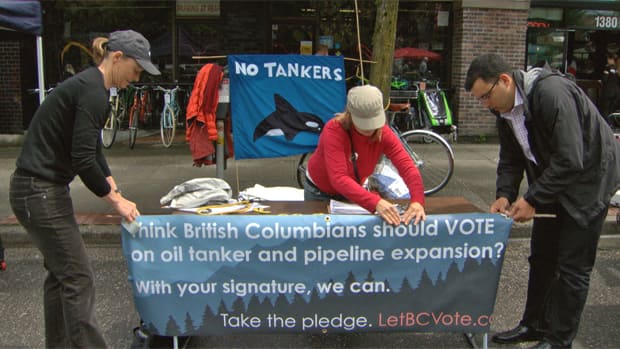 Pipeline decision on the way

A coalition of First Nations, environmentalists and lawyers have delivered a final rejection of the proposed Enbridge Northern Gateway pipeline, promising a collective campaign to defeat the project should it receive federal government approval.

Representatives of Coastal First Nations, Dogwood Initiative, Unifor, West Coast Environmental Law, Douglas Channel Watch and One Cowichan stood together Monday to confirm their intent to build democratic resistance to the project, using a citizens' initiative — the petition process that overturned the HST.

LetBCvote.ca has been in the works for months, prepared by members of the Dogwood Initiative in anticipation of the federal decision, expected after the close of stock markets Tuesday.

In contrast to the approach currently being taken by companies hoping to pursue liquid natural gas projects, Sterritt said Enbridge has been deaf to First Nation perspectives on a pipeline for nine years.

He added that people should understand that First Nations are not automatically opposed to development proposals.

"It's our communities that need jobs as much as anybody else — if not more so," he said.

The coalition warned that should Ottawa approve the pipeline, the project will be stalled by legal challenges for years to come.

With files from Terry Donnelly