Passengers getting off a cruise from Asia to Vancouver this morning say they had to deal with an outbreak of norovirus during the month-long voyage. 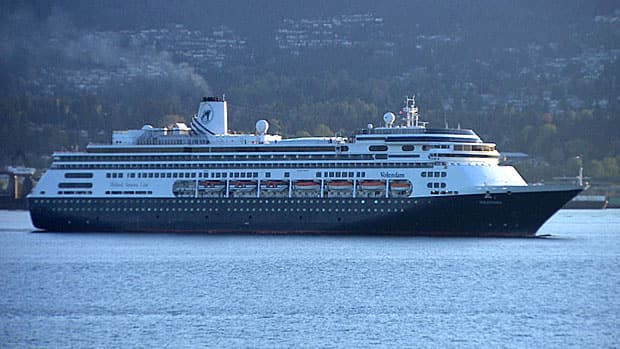 Passengers getting off a Holland America cruise from Asia to Vancouver this morning say they had to deal with an outbreak of norovirus during the month-long voyage.

When the MS Volendam docked in Vancouver this morning, passenger Jim Ball told CBC News that during the 31-day cruise, pools and hot tubs were drained, and shared books kept off limits as the crew tried to contain the norovirus outbreak.

"They're right behind you with a soapy rag, cleaning up the table," said Ball.

Holland America cruise line reported 28 guests and one crew member — 2.37 per cent of the 1,222 people on board — were sick over the course of the sailing, which included stops in Alaska.

The ship has a maximum capacity of 1,432 passengers and 647 crew. At three per cent, Health Canada could launch a full investigation. But passenger Faye Richards said the problem appeared worse to those onboard.

"It had to be quite high, because it seemed like you would never sit at a table at dinner without someone having had it," said Faye.

After the passengers disembarked, the decks of the MS Volendam were scrubbed and the ship was fully sanitized. It departed on a week-long cruise to Alaska at 5 p.m.