B.C. is ordering nightclubs and stand-alone banquet halls closed, ending the sale of liquor at restaurants past 10 p.m. and instructing venues to reduce the volume from music or other sources to conversational levels, as cases of COVID-19 continue to spike in the province.

B.C. is ordering nightclubs and stand-alone banquet halls closed, ending the sale of liquor at restaurants past 10 p.m. and telling venues to reduce the volume from music or other sources to conversational levels, as cases of COVID-19 continue to spike in the province.

Bars and restaurants must close by 11 p.m., unless they are serving food.

The amendments to public health orders come as the province reported 429 new cases of COVID-19 over a four-day period, bringing the total to 6,591. Two more people, both in long-term care, have died of the virus.

The new numbers represent four reporting periods over the long weekend. Provincial health officer Dr. Bonnie Henry said 123 of the cases were recorded between Friday and Saturday, 116 were reported between Saturday and Sunday, 107 between Sunday and Monday, and 83 new cases were confirmed between Monday and Tuesday.

There are three new health-care associated outbreaks, at Burnaby Hospital, Rideau Retirement Centre and Holy Family Hospital. There are no new community outbreaks, though there have been several exposure events in the Lower Mainland. Hospitalizations in B.C. remain relatively stable, with 32 people in hospital and 12 in intensive care. 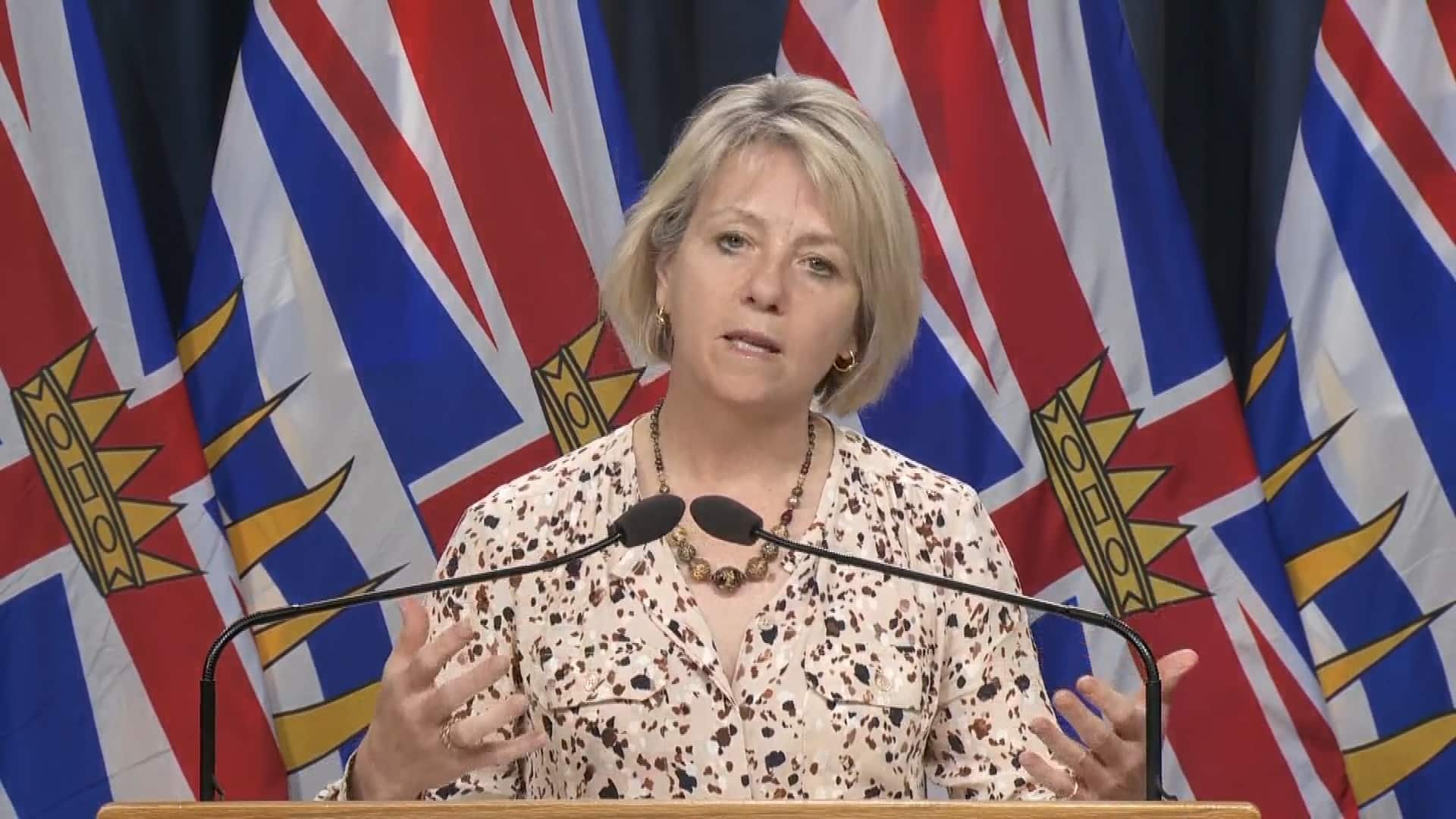 Nightclubs ordered closed in British Columbia after spike in COVID-19

1 month ago
3:18
"It became apparent that some venues were really high-risk environments,'' says Dr. Bonnie Henry. 3:18

Henry said the amended orders were issued as "a last resort."

"We recognize that these venues have tried. We've made adjustments but there are still exposures happening," she said.

"Going to a nightclub, going to a bar, going to somebody's home — close spaces with face-to-face encounters with people we don't know … that's a risk."

Henry also reiterated that B.C. residents should be easing up on social interactions as the fall approaches, reining in bubbles to five or six people.

She said the province's philosophical approach to the pandemic has been to issue minimal mandatory restrictions — but that exposures in venues like nightclubs had become a "major source" of transmission, putting strain on public health resources.

"We want to do the least amount we can by order, and make sure we can support people to do the right things they need to do for their own individual situation," she said.

Asked whether she fears that shuttering nightclubs will drive people to private parties, she said the province would continue issuing fines, especially to repeat offenders. But despite the spike in cases linked to private events and venues, Henry said B.C. is "lucky" that community transmission remains relatively low, and that the province is not considering delaying the return to school.

"If we do not put our priority as a community back on [schools], we will have long-term generational downsides," she said.

Henry said she felt restaurants remain safe — adding she "couldn't survive without them" — especially as the industry has worked hard to implement individualized safety plans.

Earlier Tuesday, Henry said B.C. was experiencing a "second ripple" of cases of COVID-19 and that she was looking at bringing in new measures to help curb the spread of the virus.

At the beginning of the pandemic, health officials and epidemiologists predicted a second wave, possibly connected to colder weather. Now, modelling predicts a pattern of cases more like ripples or "moguls," as Henry has previously called them, that will spike upwards when enough people in a population become complacent around physical distancing measures.

"I think we're probably in our second ripple," said Henry, speaking to CBC's The Early Edition on Tuesday morning.

"Partly, it's because our testing has gone up and we've had contact with larger numbers in younger people. And I think people needed a bit of a release during the summer. It was very extreme measures that we took in March and April, and it was very concerning for people."

On Tuesday, potential exposure was confirmed among staff and students at a private school in West Vancouver. In a letter to parents, the head of Mulgrave School, John Wray, wrote that the exposure occurred while Grade 9 students were away from campus for an off-site day camp experience.

Vancouver Coastal Health is now conducting contact tracing and those students and staff are self-isolating for two weeks. The students were all part of the same learning group, and the camp activities took place outdoors, with physical distancing measures in place.

"We have had such a successful start to the year. This event may feel like a setback, but such exposures are expected and we have faith in the system that Vancouver Coastal Health has put in place," wrote Wray in the letter.

B.C.'s restrictions began to ease in mid-May, as public health orders were gradually lifted. B.C. entered Phase 3 of its pandemic response plan in late June, allowing for travel within the province.

By mid-July, cases had begun to climb steadily upwards, and B.C. recorded its highest single-day jump in new cases on Aug. 28.

"We had a bit of a grace period in the summer, and allowed people to have that time," said Henry. "We know we need to put our focus and attention on priority things like getting children back into school."