Some Nexus pass cardholders are raising concerns over how long they are being forced to wait in border lineups. 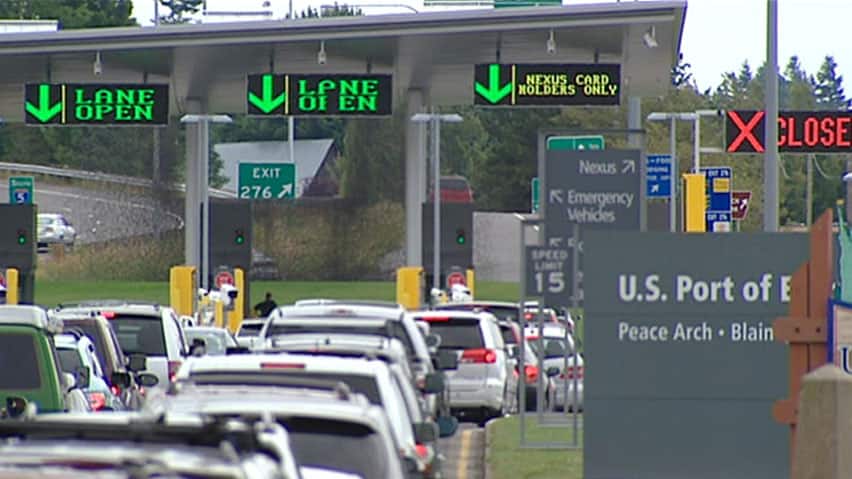 10 years ago
2:41
Some drivers find themselves stuck in long lines at the Canada-U.S. border, despite paying for a Nexus pass, the CBC's Renee Filippone reports 2:41

Some Nexus pass holders are raising concerns over how long they are being forced to wait in border lineups.

The Nexus program allows Canadian and American pass holders to pass through special lines when travelling between the two countries by land, air or water.

It's designed to make border control more efficient by allowing border protection officers  to move those who aren't considered to be a danger to border security through customs more quickly and focus on travellers who have the potential to be high-risk.

However, some Nexus pass holders say they're waiting longer than those without the card at peak hours.

Tasha Trost said she and her boyfriend, both Nexus holders, are often stuck waiting in long lineups.

"In June, we were crossing at Peace Arch on our way to Seattle and the Nexus line was much longer then the regular line," she wrote in an email. "People were trying to sneak out of the Nexus line to get back into the normal lineup."

David Gillen, the director of the UBC Centre for Transportation Studies and a Nexus card holder, said the card has been a victim of its own success.

"Initially it was very successful and the reason was … because it speeded through people that were going over the border on a frequent basis," he said. "As more and more people have joined the system, the capacity has not increased to keep up with the number of members or the number of trips that they're making."

Gillen said officials on both sides of the border need to look at increasing not just the number of Nexus lanes but also the security and immigration personnel and infrastructure.

"There has to be some flexibility that's introduced," he said. "What you don't want to do is end up taking away regular lanes to facilitate Nexus users to the detriment of people who are not Nexus card holders."

For commuter Clay Barron, the answer is simple: "Open more lanes," he said. "You see a lineup and open more lanes."

In order to qualify for the Nexus program, applicants cannot have a criminal record or have violated customs or immigration laws.

Canadian applicants are then required to submit to an interview with a United States Customs and Border Protection officer. In order to use the pass for air travel, applicants must also have the irises in their eyes scanned. A $50 fee is also required.

The Nexus program began as a joint venture of the Canada and U.S. governments in 2000. It has over 500,000 members, according to testimony at a House of Commons committee by CBSA director general Maureen Tracy, a number the agency hopes will reach 830,000 by 2015.