'Never seen anything like it': 200 dolphins spotted from ferry

Passengers on a ferry between Nanaimo and Horseshoe Bay were treated to an incredible sight on Tuesday.

Passenger said he had done hundreds of trips, but this was unique

The day started off like any other ferry ride that Henry Irizawa has taken. He's lived in Comox for 10 years and was on a Tuesday morning ferry to Horseshoe Bay — one that he's done "at least 300 times."

About 40 minutes into the trip, Irizawa recalls the captain came on the PA system to say a large pod of dolphins was swimming in front of the vessel.

Irizawa rushed onto the deck and whipped out his phone.

"I couldn't believe it," he said. "It was nothing like I had ever seen. Two hundred dolphins just having so much fun, jumping, racing." 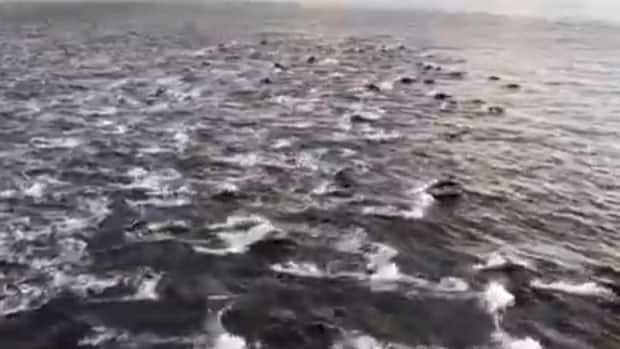 2 years agoVideo
0:38
Henry Irizawa spotted the pod while approaching Horseshoe Bay on a ferry between Nanaimo and West Vancouver, B.C. 0:38

The dolphins hung around for a couple of minutes.

"People around me couldn't speak. It was so exciting."

Irizawa posted a video of the experience on Facebook, and, as of Wednesday afternoon, it had been viewed more than 100,000 times.