Canadian rock legend Neil Young says portable music players have degraded the music listening experience, which is why he's backed a new high-resolution music company that will begin selling files and players next month in Canada.

'Music deserves to be preserved at its highest quality level,' Young says 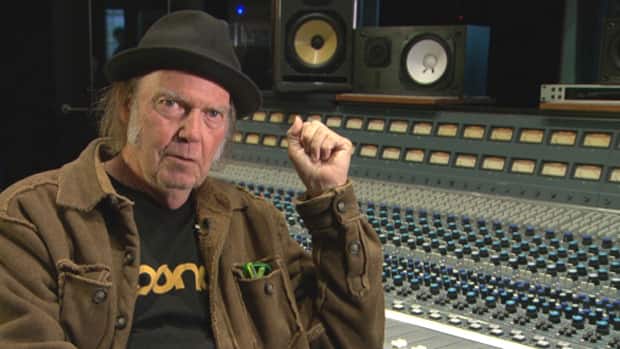 5 years agoVideo
2:28
Back to high fidelity: 'Music deserves to be preserved at its highest quality level' 2:28

The company sells the PonoPlayer, a smartphone-sized device that plays high-quality digital music files. The product launched about a year ago in the U.S. and will begin selling files and players next month in Canada.

"We built a great player," Young told a news conference in Vancouver Monday.

He said the PonoPlayer will "make any piece of music sound better."

Young argued that vinyl records offered some of the best sound for music lovers. The advent of MP3 players brought portability and convenience, but the file format meant a decline in sound quality.

In his book, Waging Heavy Peace, Young described why he's backed the product.

"The company is designed to rescue my art form, music, from the degradation in quality that I think is at the heart of the decline of music sales and ultimately music itself in popular culture," wrote Young.

Young claims that MP3s have less than five per cent of the data found in a vinyl record, and wants to give music fans the same experience that musicians hear through their headphones when recording.

"I want to bring the soul of the music industry and the technology of Silicon Valley together to create this new model, using artists as the driver.

"My goal is to restore an art form and protect the original art, while serving quality to the music lover."

'Not a mass-market product'

The cost of preserving that art form is steep. The average cost of a Pono, which is slightly larger than a smartphone, is $400 US, about $500 CDN. That doesn't include the price of custom headphones and speakers.

The players will be available through Amazon Canada, London Drugs and a Toronto-based electronics store. Music files are available for purchase in the FLAC lossless format at www.Ponomusic.com.

Graham Williams, marketing director of Vancouver's Pure Image Technology, said the Pono is "not a mass-market product" that will appeal to everyone.

"There is a market for this type of thing, but it's difficult to look at that when you can see an iPod for $100," said Williams.

In addition, the market for personal players has been impacted by the proliferation of music streaming apps and websites.

Williams said the Pono is marketed to refined music lovers who have a trained ear for high-quality sound.

"Will everybody be able to enjoy that? No," said Williams. "Some people out there will simply not be able to hear that difference."

Even within the niche market, there are competitors. Sony, with a high-definition Walkman player, and FiiO are among the companies whose offerings are available within Canada.

Young said the project, which started by raising $6 million US on Kickstarter, wasn't about making money, but rather giving listeners the opportunity to hear high-quality music.

"I just want people to have a choice," he said.