Emergency officials use specific terminology in an attempt to clearly and efficiently communicate survival information during fire season but do you know how to interpret key wildfire terminology?

The B.C. Wildfire Service has updated some key terms for the 2017 fire season 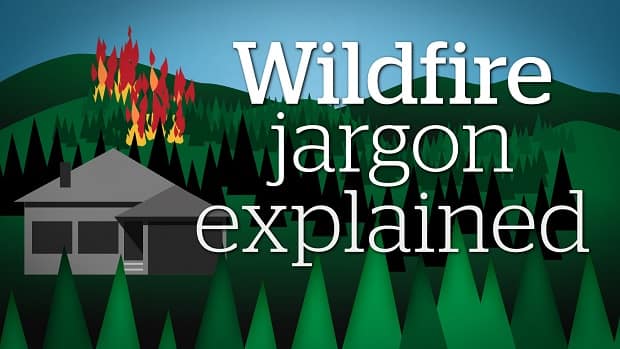 A wildfire is an unplanned fire that occurs in a wilderness area, away from people or structures. A prescribed burn that escapes its intended perimeter can also be considered a wildfire.

An interface fire is more of a concern for people. It means a fire could potentially affect man-made structures, while at the same time burning natural fuels such as trees and shrubs. In this situation, a house fire could jump to the forest or vice versa.

The recent fire in Kaleden and the 100-Mile-House-area fire fall into the category of an interface fire.

Wildfires of Note are visible or pose a threat to public safety. You can find up-to-date information on these fires here.

Stages of a fire

Initial attack and suppression efforts are used to attempt to contain a fire, the 100 Mile House Fire is currently zero per cent contained.

A fire is considered contained when a fuel-free perimeter has been established around the fire.

"Sometimes, we will say something like "80 per cent contained." That means we've dug a guard or removed the fuel from 80 per cent of the fire's perimeter," said Allen.

One way firefighters establish fuel-free barriers, or fuel breaks, is by digging down to the mineral soil, a lower layer of soil that contains very little combustible material.

An escaped fire has breached an established control line and remains out of control, following an initial attack. Prescribed burns can also become escaped if they burn beyond their intended area.

"Sometimes, it can look like the fire is out but deep underground things can still be smouldering and you can have underground spread," said Allen.

When a fire is at this stage, (under control but still smouldering) it is being held. Previously, this was called the mop-up stage.

Patrol inspections take place along a control line or portion of a fire perimeter "to prevent escape of the fire after a wildfire has been contained."

When a fire threatens people or property, the B.C. Wildfire Service may make evacuation recommendations to local authorities.

"Life and property is always our highest consideration, as well as the safety of our crews and the communities around us," Allen said.

An evacuation alert signals to residents that they should be ready to leave on short notice. Anyone who leaves during this stage does so voluntarily.

Under an evacuation order, people must leave the area immediately. Evacuation orders are enforced by law enforcement and RCMP have been going door to door in the case of the Gustafsen Road fire near 100 Mile House.

During an evacuation order, registering all family members at a local reception centre tells emergency responders that you are safe.

These are just a handful of the terms that B.C. residents will encounter this summer. You can find a full glossary on the B.C. Wildfire Service's website.