B.C. NDP Leader Adrian Dix has conceded the B.C. Liberals, and not his heavily favoured party, will form the province's next government. 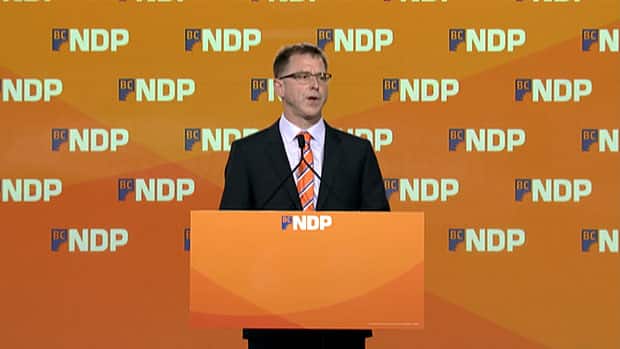 B.C. NDP Leader Adrian Dix has conceded the B.C. Liberals, and not his heavily favoured party, will form the province’s next government.

With nearly all of the polls reporting, CBC News projects just 32 NDP candidates have been elected, with one candidate leading in another riding. That's down from the 35 seats the party captured in the 2009 provincial election.

It is perhaps one of the worst collapses in modern provincial political history for the party that most opinion polls had leading by a healthy margin and expected to form a majority at the beginning of the campaign. Opinion polls and political pundits called this election the NDP’s to lose.

Dix made no mention of whether he intended to stay on as leader, saying the future of the party would need to be assessed in discussion with his caucus in the coming days.

However, at this point his leadership is almost certainly in question within the party.

It’s not clear whether the opinion polls were wrong from the outset, or the party simply lost momentum as a result of a poor campaign.

Dix took heat for his performance in the televised leader’s debate and for his apparent flip-flop on the Kinder-Morgan pipeline expansion. He also faced criticism for running a lacklustre campaign that was basically a series of events with no real substance, flow or vision.

Dix spent the 28-day campaign touting the New Democrats as the "party of change for the better," carefully sticking to his pledge of running a "positive" campaign and avoiding personal attacks on provincial Liberal Leader Christy Clark.

Some are now questioning the campaign strategy, wondering whether Dix waited too late in the campaign to remind voters of the Liberals’ handling of the controversial harmonized sales tax and the sale of B.C. Rail.

Dix managed to hang on to his Vancouver–Kingsway seat.

Dix won his party's leadership in 2011 after former leader Carole James stepped down amid a public feud with dissidents in her caucus.

James had been working to rebuild the NDP after its collapse in the 2001 election, when the party won just two seats in the 79-seat legislature. The party won 33 seats in 2005 and took 35 seats in 2009.

While the NDP has been a mainstay of B.C. politics for 80 years, it has won the mandate to govern only three times, and has now been named official opposition 18 times — more than any other party in B.C. history.