The NDP claims it has obtained proof the B.C. government's chief negotiator admitted in court the province was trying to provoke a full teachers' strike. 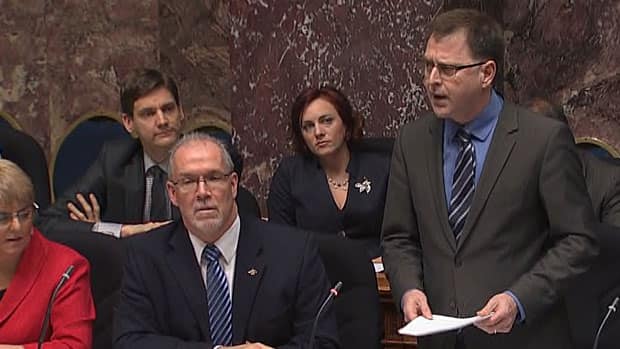 The NDP unveiled court transcripts in the legislature during question period Wednesday it claims show the B.C. government's chief negotiator admitting under oath the province was trying to provoke a full scale teachers' strike.

The transcripts contain testimony made under oath during a trial that ended in a scathing ruling last month, when B.C. Supreme Court Justice Susan Griffin found​ the province had violated teachers' constitutional rights in an ongoing dispute between the government and the B.C. Teachers' Federation (BCTF).

The documents refer to government negotiator Paul Straszak testifying under oath about a conversation he had with Premier Christy Clark's deputy minister about the status of labour talks.

B.C. Education Minister Peter Fassbender is standing by the Premier.

"I'm not going to comment on his testimony because that is before the courts. What i will tell you, it has never been the intention of this government to provoke a strike."

Last month, Griffin ordered the province to pay $2 million in damages for stripping teachers of their collective bargaining rights and failing to reinstate them when ordered by the court.

The government has since announced it will fight the settlement with an appeal in court.

Clark addressed the issue for the first time in public, just hours before the NDP revealed the transcripts, insisting her government "absolutely did not" try to provoke a teachers' strike as suggested by the judge.

"That was the characterization that was set out. I fundamentally disagree with that. It was not correct."

However, Clark is refusing to release the cabinet documents the judge used as evidence to make her finding.

"I took an oath of confidentiality and those oaths exist for a reason, so I don't intend to break that oath," said Clark.

"Actually going out as a matter of public policy and trying to provoke a school strike and they've been caught," said Dix.

The negotiations were set to pick up last week, but they were postponed after the government announced it was appealing the recent B.C. Supreme Court decision.

BCTF President Jim Iker says he hopes this time the government comes to the table in good faith.

"We know that the past history, especially from the recent Justice Griffin's decision shows that in the last round they had no intent of coming to an agreement with us," said Iker on Wednesday.

Iker notes the facts in Griffin's decision were not in dispute.

"They had ulterior motives, such as wanting to provoke a strike with us and shut down schools for our students."

With files from Steven Smart